LROC WAC: Rainbows on the Moon 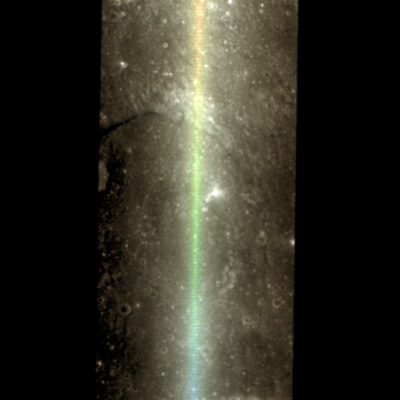 With the Sun exactly overhead, illumination and viewing angles of a LROC WAC observation create a rainbow effect. The Wide Angle Camera on board LRO is turned to record seven distinct wavebands. Here, visible light data of 689 nm wavelength is reproduced in red, 643 nm in green and 604 nm in blue, from observation M109168446CE. The scene above covers ~ 120 kilometers, north and south of the equator, east and west of 12° east longitude; LRO orbit 1222, October 3, 2009 [NASA/GSFC/Arizona State University].
Brett Denevi
LROC News System

In past featured images, we've seen great examples of the huge effect lighting can have on how the lunar surface looks in NAC images. With the color images from LROC's Wide Angle Camera (WAC), the effects can be just as extreme, and the design of the camera can lead to some unusual and scientifically rich observations. This is the case in the image above, where the 689 nm, 643 nm, and 604 nm filters are displayed in red, green, and blue, respectively. This image was acquired as the Sun was exactly overhead, allowing us to observe the "opposition surge". This is a surge in brightness that occurs when the Sun is directly behind the observer because of two effects. First, there are no shadows seen on the surface, because each boulder and grain of soil's shadow is hidden directly beneath it. Second, as the light reflects back to the observer it constructively interferes with itself. 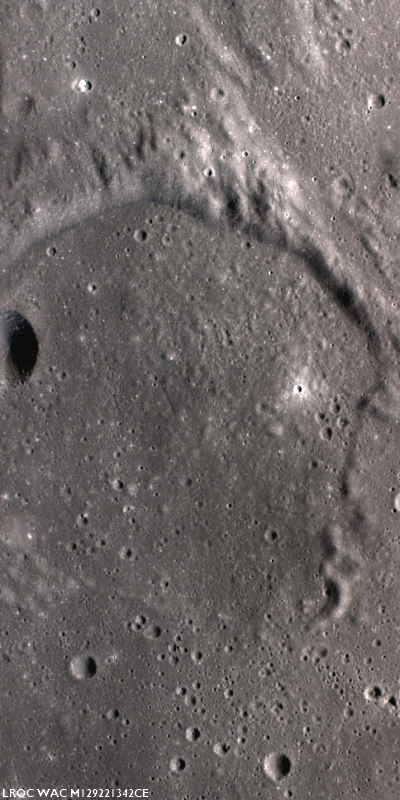 The same scene, under more typical illumination (Sun is 54° from the vertical). 689 nm filter in red, 643 nm filter in green, and 604 nm filter in blue, from observation M129221342C [NASA/GSFC/Arizona State University].
But why does the image above have a rainbow? Because each filter observes different pieces of the ground at different times, it observes the opposition surge at a slightly different time. When the observations from separate filters are combined to a single color image, this shifting bright spot is seen as a rainbow. When we make mosaics to look at color variations on the lunar surface, we use images where the Sun is a bit lower in the sky (around 30° from the vertical) where this extreme effect is no longer seen. But that doesn't mean these images aren't useful - they provide a huge new dataset for studying how light interacts with a particulate surface at different wavelengths. Perhaps an esoteric-sounding field of study, but this data can help us understand the reflectance images and spectra we have of the Moon and other bodies throughout the Solar System.
Posted by Joel Raupe at 7:17 AM