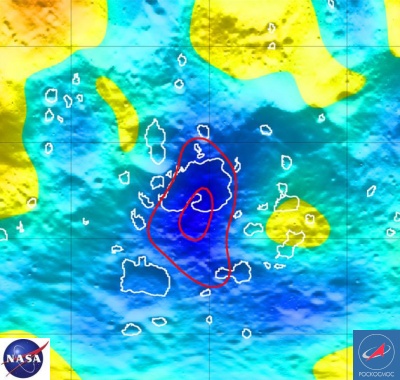 The choice of the permanently shadowed region (PSR) at Cabeus (largest white line-encircled district above) for the LCROSS impact was probably a wise one. The on-going LRO instrument survey of the Moon continues to show the area as, by more than double, the location of the largest estimated water signature of any large location (4% by weight), though it may not be the wettest point source. Intriguingly, much of the water signified by neutron suppression is found outside PSRs. Further, some craters within PSRs elsewhere show little to no such signs of water by neutron suppression while neighboring similar areas that do. Along with the discovery of a daily hydrological cycle on the Moon, at low latitudes, and previously undetected water in Apollo and Luna samples, newly learned details about the nature of lunar hydrogen pose at least as many, or more, questions than they have yet been answered [NASA/ARC/Anton Sanin/LEND].
NASA will host a media teleconference at 2 p.m. EDT (1800 UT), Thursday, October 21 to discuss additional findings from NASA's Lunar CRater Observation and Sensing Satellite (LCROSS) and the Lunar Reconnaissance Orbiter (LRO) missions. The results will be featured in six papers published in the October 22 issue of the journal Science. (The journal's embargo on these results will be lifted at the start of the press conference.

The briefing will focus on the data from LRO's Diviner Lunar Radiometer Experiment which measures surface and subsurface temperatures from orbit, the Lyman Alpha Mapping Project (LAMP) presently mapping the entire lunar surface in the far ultraviolet and the Lunar Exploration Neutron Detector (LEND) creating high-resolution maps of hydrogen distribution and gathering information about the neutron component of the lunar radiation environment.

To participate in the teleconference reporters should contact Michael Braukus at michael.j.braukus@nasa.gov or at (202) 358-1979. Requests must include media affiliation and telephone number. Supporting information, available at the start of the teleconference, will be posted HERE.

Audio of the teleconference will be streamed live at: http://www.nasa.gov/newsaudio
Posted by Joel Raupe at 9:07 PM