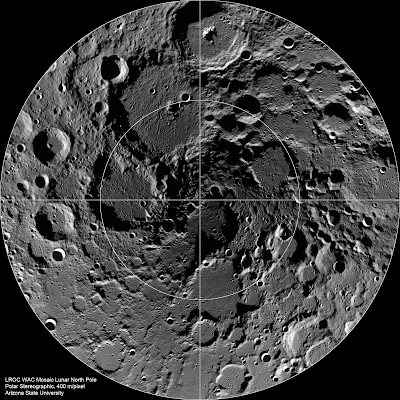 The lunar poles have long been places of mystery and promise. Since the Moon's spin axis is tilted less than 2 degrees relative to its orbital plane, the interiors of many topographic lows (mostly impact craters) never receive any direct sunlight. These regions are perpetually dark and thus very, very cold. The Diviner instrument on LRO has shown that the interiors of some of these shadowed regions are as cold as -248°Ç (-415°F or 25K)! Conversely, a few mountain peaks receive nearly constant illumination resulting in only very small temperature variations. One such peak is on the northern rim of Peary crater, close to the pole. The night to day temperatures at the lunar equator range from about -150°C to 100°C (-238°F to 212°F), so finding a spot for a lunar base with only small temperature variations and nearly constant solar power is a large engineering advantage. 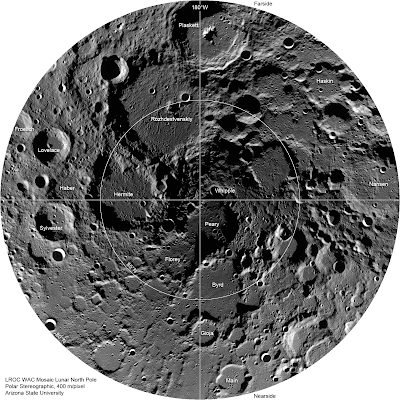 LROC collected 281 WAC images during a lunar northern summer month to provide this complete picture of the polar region. Right now the Moon is in southern summer and much of the north pole region is in shadow. However, LROC continues to image the pole even in winter to help scientists identify peaks with near year round illumination.

Most craters near the lunar poles are named after famous polar explorers. Like all bodies in the Solar System the International Astronomical Union (IAU) dictates themes for types of features. The theme for craters on the Moon is famous scientists and polar explorers. For a comprehensive listing of named features on the Moon visit the IAU nomenclature web page hosted by the USGS.

Be sure to also explore the WAC mosaic of the South Pole. 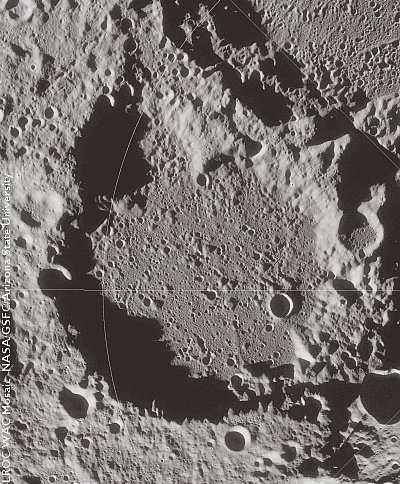 Detail from LROC Wide Angle Mosaic (WAC) of the North Pole above, focused on the coldest place in the Solar System, inside the 114 km long western interior walls of Hermite crater, near the intersection of the 270° meridian and latitude 80° North [NASA/GSFC/Arizona State University].
Additional Reading:
LRO Mini-RF spends month mapping lunar poles
August 8, 2010 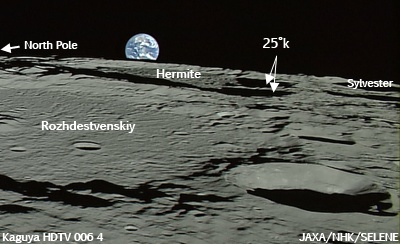 Excellent diagrams and images! I enjoy coming here to catch up with pictures and descriptions, well done. I didn't know about some of those naming schemes, that is fascinating... and I liked the link to planetarynames.wr.usgs.gov... also clicked through to there and learned quite a lot =)