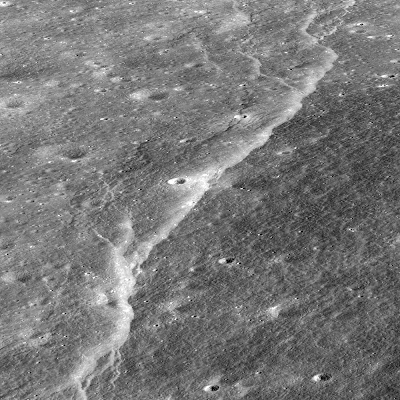 Over time, the surface of the Moon fractures and buckles as it cools and shrinks, resulting in spectacular landforms. Stereo images provided by the LROC Narrow Angle Camera (NAC) allow a detailed look at these amazing features; view is to the east, foreground to background distance is ~3 km [NASA/GSFC/Arizona State University].
Mark Robinson
Principal Investigator
Lunar Reconnaissance Orbiter Camera
Arizona State University

The wall of Slipher crater is deformed by one of many scarps found in the lunar highlands, which are thought to form as the Moon shrinks due to magma deep inside the Moon cooling and "freezing" to solid rock. Unlike water-ice (ice floats), most rocks are denser than their magma (you can think of water as magma and ice as rock), meaning rocks occupy less volume than their parent melt.

As the interior of the Moon shrinks due to this volume change, the outer crust of the Moon wrinkles and folds, and the linear, rounded shape of the lobate scarp occurs as the crust breaks and one segment is thrust on top of another. 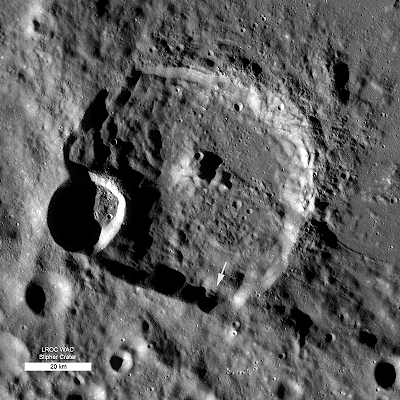 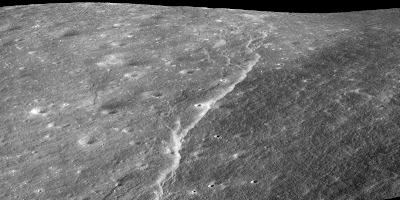 A broader view of the Slipher lobate scarp created by rotating the stereo-based topography with the image draped on top. The scarp is about 20 meters high, foreground to background distance is ~3.5km. View towards the east [NASA/GSFC/Arizona State University].
LROC NAC stereo observations allow scientists to create high resolution topographic maps, sometimes known as digital elevation models (DEMs); details on LROC stereo processing can be found HERE. A (DEM) is a simple raster (two dimensional array) file where each pixel represents the local elevation relative to a reference point. For these lunar data the reference is a sphere with a diameter of 1737.4 km - the average radius of the Moon. To visualize the DEM, software can be used to create views from any perspective, as in the images above where you appear to be hovering above the surface, looking at the terrain from the side. 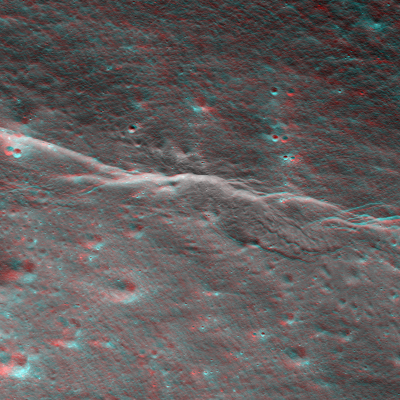 For a 3-D effect, put on your anaglyph glasses (red on the left)! In this view, south is to the top of the image, width is 1.7 km [NASA/GSFC/Arizona State University].
Color shaded relief is another common product used to convey topography from a DEM. In the image below, a shaded relief map was generated from the DEM and then a color overlay was added that depicts the elevation. In this small area green values are the lowest and red areas the highest. DEMs are one of the most important datasets scientists use to analyze terrain and obtain quantitative measurements of height and slope. 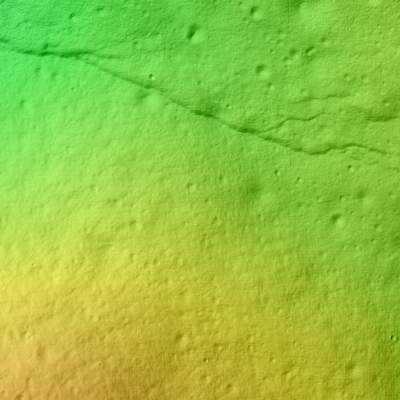 Shaded relief map of a small portion of Slipher crater, image width is 2.0 km [NASA/GSFC/Arizona State University].
Additionally, high-resolution topography gives engineers the means to decide the safest place to land a spacecraft, robotic or piloted. The new LROC topographic maps will enable future mission planners to select safe and feasible routes for rovers and explorers. What questions are left regarding these fascinating scarps? How would astronauts investigate their origin? Right now LROC is collecting high resolution images from all over the Moon. As the data accumulates, scientists can explore spatial relations between the scarps themselves and the their surroundings. For example, you can see Slipher crater has a somewhat square form (similar to Meteor Crater, AZ) indicating pre-existing fractures in the crust. We do know that the Slipher scarp formed as the crust was compressed - what role did the older fractures have in the location and size of the scarp? What triggered the compression event? Did the scarp form in one instant or over a series of events? Detailed examination of the fault surfaces, combined with a long term seismic characterization, would reveal the complex history of the Slipher scarp and the highland scarps in general. So there is much to do in terms of unraveling the thermal and seismic history of the Moon!

What a fantastic destination for explorers - imagine seeing the Slipher scarp appear while descending to the Moon's surface! In the meantime, 3-D anaglyphs help you see the landscape as it would appear as your spacecraft comes close to the surface.

Explore the full resolution NAC orthimage at 0.50 meter/pixel and the color shaded relief image at 2.0 meter/pixel!

For more information about the use of LROC NAC images in DEM generation and topography studies, be sure to check out the: Topography of ancient lunar basins and Orientale basin.
Posted by Joel Raupe at 12:59 AM