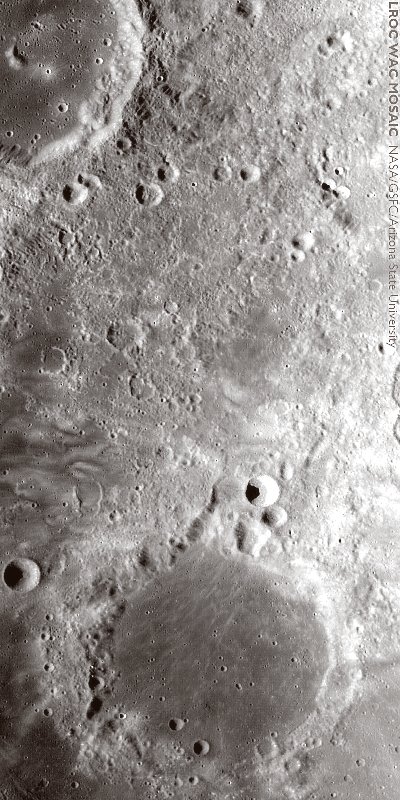 
Certain places on the Moon look freshly dusted with snow. Bright sweeping patterns,visible only from high overhead, look like cosmic cave paintings or the Nazca Lines in Peru. These bright ghostly patches or “swirls” appear on the Moon’s vast lava flats, atop mountains and often both simultaneously.

Similar phenomena have been cataloged on Mercury, and perhaps also on other “airless bodies” in the solar system, but none so far beat out the Moon's population of swirls.

Aside from their chaotic, ink blot patterns, these swirls are made of regolith that refuses to grow old. As authors of a new study appearing in the Bulletin of the American Astronomical Society put the case, regarding a familiar Near side landmark, "the degree of degradation of Descartes C suggests it should not be optically bright, yet it is."

But accepting the evidence of immature surfaces built up into something that "looks like the shadow” of invisible magnetic fields, crediting swirls to the crustal magnetism that inevitably accompanies them, has not been an easy thing for investigators to swallow.

The magnetic fields that accompany swirl albedo "anomalies" certainly seem old enough. Investigators believe a now-extinct global magnetic field became “shock-fossilized” into the Moon’s thicker crusts at points on the lunar globe opposite the basin-forming-impacts that created Mare Imbrium, Serenitatis and others of the more famous "seas" between 3.9 and 3.1 billion years ago. And intense crustal magnetism is definitely knotted tightly in places opposite those basins on the Moon.

At the antipodes of Mare Imbrium for example, around the fabulous albedo swirl patterns of Mare Ingenii, a very impressive magnetic field has been well-mapped. On maps of crustal magnetism the Far side's southern latitudes clearly mirror the Near side's major famous basins. 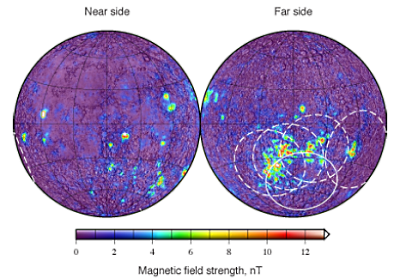 The Moon’s most intense magnetic field, strong enough in places to hollow-out a mini-magnetosphere in the solar wind, is found on the opposite side of the Moon from Mare Crisium, around the Far side Gerasimovich craters. Accompanying those fields are swirl albedo anomalies, though they are more difficult for the eye to trace out from the brighter highland terrain background. 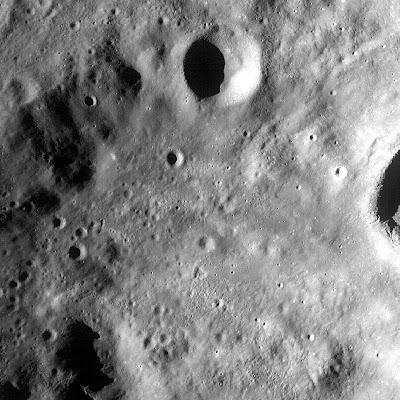 Crisium Antipodes (Gerasimovich). Swirl albedo patterns here (like the "Mushroom" of Gerasimovich D - compare this image with the image immediately below) are sometimes not as easy to immediately recognize, unlike swirls appearing on darker basins, like Reiner Gamma in Oceanus Procellarum or upon the plains of Mare Ingenni. The above monochrome LROC WAC M102966996ME observation (LRO orbit 345, July 23, 2009) [NASA/GSFC/Arizona State University]. 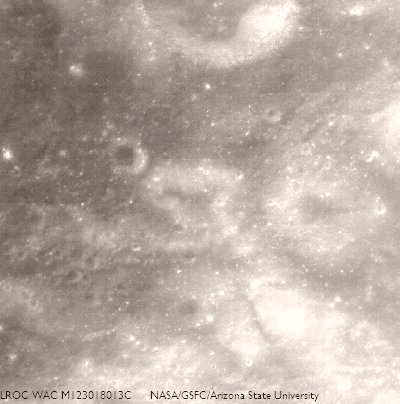 The magic mushroom "swirl" at Gerasimovich D. The area surrounding 22.3°S, 237.5°E is antipodal to Mare Crisium. As persistent as lunar swirls appear to be, Mini-RF scans from the Lunar Reconnaissance Orbiter indicate this swirl and others nearby are less than 10 centimeters thick.


As with many other features, things are different on the Near side. The most familiar swirl albedo-magnetic anomalies on the Near side do not seem to be "antipodal" to any basin. This hardly conclusive, but no known clue points to the existence of a buried basin (e.g., cryptomare and/or gravity anomaly) antipodal to the Near side swirls and magnetic fields at Reiner Gamma, west of Airy crater or at the Descartes formation, 60 km southeast of the Apollo 16 landing site.

The most renowned lunar swirl of them all is Reiner Gamma. (See "Another look at Reiner Gamma, June 30, 2010.) Near side swirls may be related to a different source of magnetism, just as Reiner Gamma seems optically entangled with rise and fall of lavas at Marius Hills. 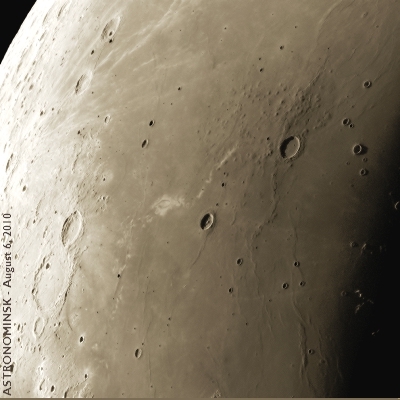 The new study, based on data returned from the Mini-RF radar on board LRO, focuses attention on two strongly representative examples of the differences between albedo swirl-magnetic anomaly on the Near and Far sides. For the Far side investigators scanned area surfaces around the swirls of Gerasimovich and for a Near side sample the authors examined the Descartes formation, in particular the small crater Descartes C, on the northeastern rim of ancient Descartes, a 30 km-wide Near side landmark. 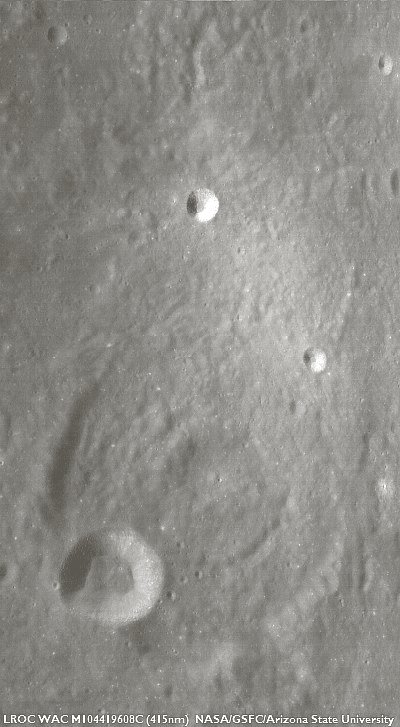 While the bright albedo on the grooved highland north of very ancient Descartes has been mapped and observed through modest telescopes for centuries the albedo wasn't identified as a swirl anomaly until the 21st century. A brilliant contrast becomes scattered in richer details when viewed up close, as in this false color montage image of 415 nm waveband light, just below the range of human vision, derived from three LROC WAC observations during the summer of 2009 [NASA/GSFC/Arizona State University]. 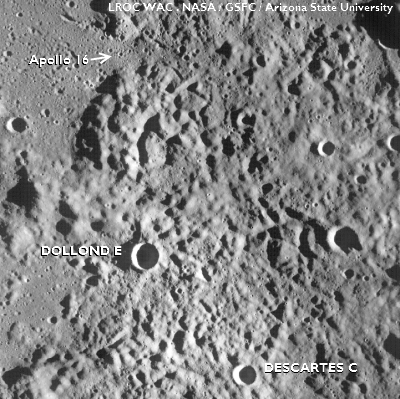 Even though the vast family of lunar swirl phenomena had already been identified, though the bright patch on running northwest of Descartes C, like a dusting of snow, was not recognized as genuine swirl until 2001. Magnetometer data from end-of-mission low orbital passes (18 km) by Lunar Prospector in 1999 were later identified with now is thought to be the most intense magnetism on the Moon's Near side [NASA/GSFC/Arizona State University].


My colleague Larry F. Scott and I were happy to learn the new Mini-RF study's authors (The Surficial Nature of Lunar Swirls as Revealed by Mini-RF on LRO; Neish, Blewett, Bussey, Lawrence, Mechtley, Thomson, Robinson and the Mini-RF Team - American Astronomical Society, DPS meeting #42, #18.06; Bulletin of the American Astronomical Society, Vol. 42, p.979) selected Descartes C because their results are well in line with suggestions we put forth together in 2008.

The full text of the study published last week is not yet available to us, but the abstract was released and reads as follows:

Lunar swirls are optically bright, sinuous albedo features found on the Moon. Lunar swirls appear to overlay the lunar surface, apparently representing diffuse brightening of unmodified terrains. Lunar swirls are associated with regions of anomalously high crustal magnetic fields, but their exact formation mechanism is unknown. The Mini-RF synthetic aperture radar on LRO acquired a comprehensive set of radar images of these enigmatic features, including the first radar observations of swirls on the lunar farside. A few general remarks can be made about the nature of the lunar swirls from this data set.

First, the average radar properties of lunar swirls are identical to nearby non-swirl regions, in both total radar backscatter and circular polarization ratio (CPR). This implies that average decimeter-scale roughness and composition within the high-albedo portions of the swirls do not differ appreciably from the surroundings, and thus that the swirls are a very thin surface manifestation -less than 10 cm- not observable with S-Band radar.

Secondly, bright swirl material appears to be stratigraphically younger than an impact melt flow at Gerasimovich D newly discovered in Mini-RF images. This observation indicates that the swirls are capable of forming over timescales less than the age of the crater, perhaps less than 1 Ga. This data set also provides information about the origin of the lunar swirls. In at least one case, the presence of an enhanced crustal magnetic field appears to be responsible for the preservation of a high-albedo ejecta blanket around an otherwise degraded crater, Descartes C.

The degree of degradation of Descartes C suggests it should not be optically bright, yet it is. This suggests that the albedo is preserved due to its location within a magnetic anomaly, and hence supports an origin hypothesis that invokes interaction between the solar wind and the magnetic anomaly.


If we accept that magnetism can persist, in some places intensely, for almost 4 billion years, the optically immature regolith of their swirls cannot. Experiments show freshly "gardened" lunar regolith, such as the bright rays of 109 million year old Tycho, inevitably darken under the relentless solar wind in "only" 900 million years.

Accepting that locally intense magnetic fields can and do deflect solar wind they are too small to bend cosmic rays, which - though rarer- build up similar maturing affects over time. Neither can they deflect the micrometeorites that continuously “garden” the top 3 centimeters of lunar surface every two million years. Because lunar swirls cannot be as old as the magnetic fields where they congregate, some other, more dynamic mechanism has to be the source of their optically immaturity.

In 2008 we weakly suggested an interaction with the Moon's dusty, dynamic exosphere, a process where the believed migration of charged and levitated sub-micron-sized dust behaves differently in the presence of crustal magnetism. Thankfully, other studies by more qualified investigators, especially those working the Mini-RF team, have described just such a process earlier this year and with this most recent study.

Though other sources of regolith freshening probably exist, it may eventually be determined that dust migration is the source of swirl albedo phenomena, repelled and then blocked from reintroduction to the lunar surface in the presence of crustal magnetic fields. Such a process would continually allow certain areas on the Moon to remain eternally immature.

The still-mysterious Descartes formation
May 10, 2010
Posted by Joel Raupe at 7:00 PM