Where are the wettest places on the Moon 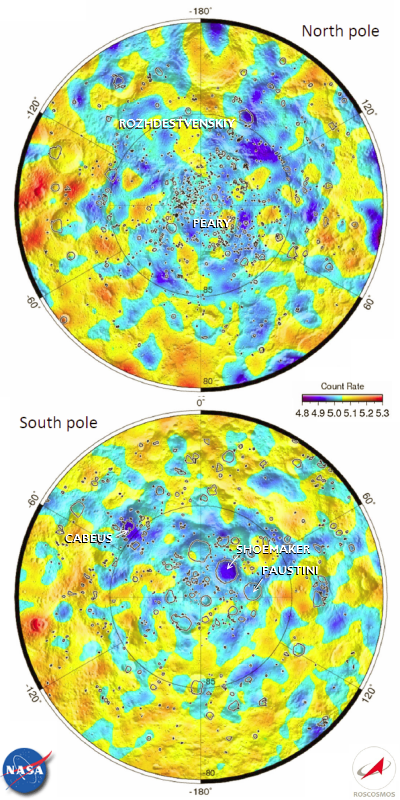 High resolution (~15 km) polar maps of collimated epithermal neutrons created by the LRO Lunar Exploration Neutron Detector (LEND) team. The permanently shadowed region at Cabeus shows an indication of 4% hydrogen (by weight), while the Shoemaker crater neutron suppression signature, entirely within a widespread PSR, shows a signature consistent with 2%. Note that the crater Faustini, similarly situated and permanently shadowed, shows a very average polar neutron suppression. The reason for this disparity is not yet known.
The Lunar Exploration Neutron Detector (LEND) flying with LRO has enabled investigators to create high-resolution (15) km) maps of the collimated epithermal neutron counting rate over the lunar poles.

Overlapping these data upon new and improved maps of the Moon's confirmed permanently shadowed regions (PSRs) there has proven puzzling. Though the neutron suppression maps from Lunar Prospector had already strongly hinted that hydrogen, most likely in the form of water ice, might be more widespread - outside - permanent shadow - than cold trap placement models yet suggested, many attributed this to the low resolution of the 1999 neutron instrument.

Now LEND has identified several of what are being called "Neutron Suppression Regions," using only neutron measurement data, and the result has been what are now three types of NSRs. There are NSR's "well-correlated" with a PSR, NSRs well-correlated with a part of a PSR that nevertheless stretch well outside the shadows into areas illuminated by the Sun. Finally, there are NSRs not correlated with any large PSR. In fact, taken in all, there are as many areas typified by neutron suppression outside permanent shadow as inside.

The picture developing of the new lunar hydrology, a daily cycle and the volatiles (and now additionally a surprising variety of exotic elements and compounds) stuck within polar cold-traps is has led to yet another rediscovery of the Moon.

Below are links to the slide presentations (pdf) that accompanied the LEND team's reports about their findings made to the Annual Lunar Exploration Analysis Group (LEAG) Conference on September 16, 2010:
Main Results from LEND Instrument After One Year of Lunar Mapping Onboard NASA’s LRO
Mitrofanov, Litvak & Sanin, et.al.

Which Spot on the Moon has the Highest content of Hydrogen?
Sanin, Mitrofanov & Litvak, et.al.

Much of the Hydrogen Enrichment near the Lunar South Polar is Outside the Permanently Shadowed Regions
Boynton, Mitrofanov & Sanin, et.al. 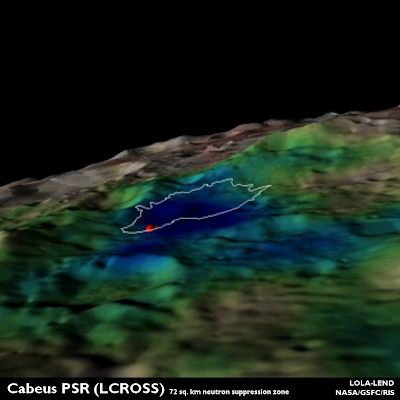 LRO laser altimetry (LOLA) together with neutron suppression measurements (LEND) are combined to show the 72 sq. km permanently shadowed region targeted by LCROSS is not the only contiguous area there where a neutron suppression consistent with the hydrogen (in the form of water) has been detected. Areas outside the white boundary are regularly illuminated by the Sun. (Larger view, HERE) [NASA/LOLA/LEND].
Posted by Joel Raupe at 10:02 PM