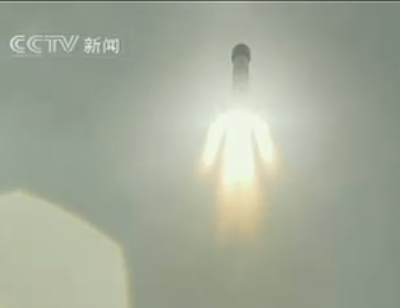 Chang'E-2, second of China's four planned unmanned missions to the Moon through 2017, begin it's mission successfully Friday, October 1, 2010. [CCTV-4].
The Chinese National Space Agency's Lunar Exploration Program (CLEP) successfully began a second unmanned lunar mission, Friday October 1, 2010, with high confidence in their spacecraft and high hopes for what is billed as a technical mission. A modified Long March 3C booster lifted off on-time, at the opening of its launch window, and soon accelerated Chang'E-2 toward it's planned rendezvous with the Moon 120 hours later.

It's a faster, direct trajectory than was used in 2007 to increase an Earth-orbit apogee for Chang'E-1 probe to encounter the Moon at the height reached in a third eccentric orbit, and reflects China's earned confidence in their Lunar Exploration Program.

"China had not been to the Moon before Chang'E-1 so we were very prudent and adjusted its transfer orbit in a very slow manner. It traveled 2.06 million kilometers before lunar orbit insertion," Ouyang said. "It's different now. We can send Chang'E-2 directly to the moon, and we have also planned to reach the Moon within five days."

The Chang'E-2 mission profile calls for a lower lunar orbit, and hints at China's intention to eventually maneuver the probe into one or more rehearsal transfer orbits with a 9 km perilune over future landing targets. Equipped with an improved digital camera, mission planners hope to use these low passes to gather images of selected landing targets at higher than an advertised 1 meter resolution.

Chang'E-3, a future stationary lander with robotic rover is under development for 2013 along with Chang'E-4, a lunar sample return mission in 2017. 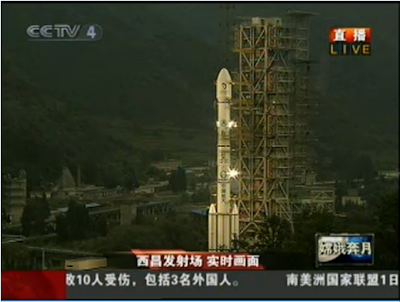 China's State-run media pulled out all the more obvious stops, Friday evening, devoting well over an hour of full televised coverage of the successful launch of Chang'E-2 from Xichang Satellite Launch Center in Sichuan Province [CCTV-4].
Mainland sources report specifics on the Chang'E-2 payload are "necessarily similar to that of it's predecessor," with a few significant differences: 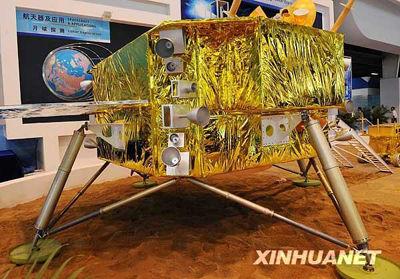 Prior to launch, Yong-Chun Zheng. of the National Astronomical Observatories at the Chinese Academy of Science in Beijing outlined more specifics of the CLEP program's legacy and future.

The Chang'E-1 orbiter was the first lunar probe of China. The lunar orbiting project is the first step of China's "orbiting, landing, returning" strategy of lunar exploration. Chang'E-1 was successfully launched October 24, 2007 at Xichang Satellite Launch Center and was guided to a sucessful targeted impact March 1, 2009.

The total mission length was 495 days with a total raw data count of approximately 1.37TB, with 4TB of scientific data product produced. By the analysis and application of these data, a series of science results have been achieved, especially "the global image of the Moon." Chang'E-1 completed its four scientific objectives and provides the foundation for the promotion of lunar and planetary sciences in China and for succeeding lunar exploration missions.

Chang’E-2 had been designed and produced as a backup of Chang'E-1. After the success of Chang'E-1, technical modifications for new mission goals for Chang'E-2 were developed as technical test vehicle for the second stage of China’s Lunar Exploration Program (CLEP). Following launch, Friday:

The frequency of laser pulse of laser altimeter will be improved from CE-1's 1 Hz to CE-2's 5 Hz. The mission goals of CE-2 will focus on high resolution imagery of the planned landing site of the CE-3 lunar lander and rover.

Key technology involving soft landing a on the Moon will be tested during the CE-2 mission, and the success of CE-2 will provide an important technical basis for the successful implementation of China's future lunar exploration.