Following a third orbital trim, Chang'E-2 has been successfully inserted into it's targeted mission orbit.

Dr. Yong-Chun Zheng of the Chinese Academy of Sciences reported early Saturday (UT) that the third braking of Chang'E-2 was successfully completed at 03:17, October 9 (UT).

"The braking action lasted for about 15 minutes," Zheng said "Chang'E-2 has entered its initial target orbit of 100 x 100km with a period of about 117 minutes."

There was no word yet on when perilune for China's second lunar orbiter will be brought down to as low as 15 km to enable very high resolution surveys of potential landing sites for Chang'E-3 and 4. 'Target Rainbow,' Sinus Iridum, the "Bay of Rainbows," high resolution survey target for Chang'E-2, the second lunar orbiter that entered orbit October 6 after a nominal direct transit after only 112 hours from launch. (As impressive as such navigation still is, contrary to press account, this was not the "fastest" such transit in history.) 411 km-wide Iridum is an announced landing target for the Chang'E-3 stationary lander and rover under development for 2013. From LROC WAC mosaic of 40 observations (see below) during LRO orbits 2469 through 2491, January 9-10, 2010 [NASA/GSFC/Arizona State University].
"In the target orbit, Chang'E-2 will work and explore the lunar surface for about half a year. The topography and material composition of the lunar surface will be measured in the future. During that time, the space environment and microwave thermal emission of the moon will be measured by Chang'E-2."

Instruments on board Chang'E-2 began checking in beginning soon after launch, October 1. Following a 17 second orbital trim Friday, October 8 Chang'E-2 was brought down to an 3.5 hour elliptical orbit.

"The GRS, SWID, HDP were powered up and began work duirng the 112 hour trans-lunar coast. The CCD and MRM will be powered up after Chang'E-2 enters its mission orbit and will begin mapping the topography of the lunar surface.

"Topography data and technology testing," Zheng said, "will be helpful for the soft landing of Chang'E-3.

Chang'E-3, a stationary lander and lunar rover, are under development for launch in 2013. Further along, planning is also under way for Chang'E-4, an unmanned sample return mission in 2017. 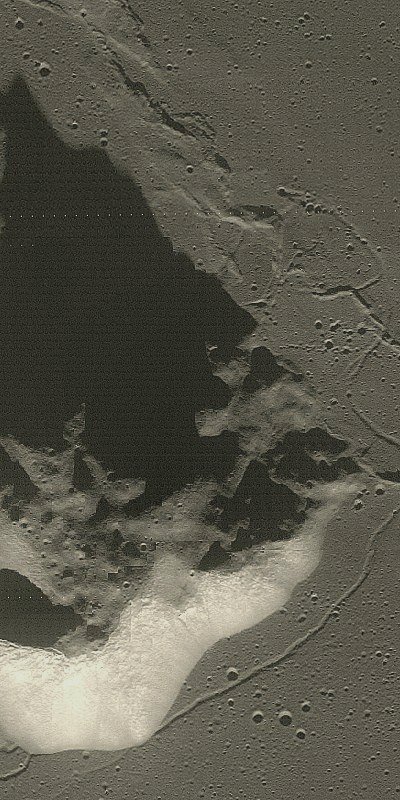 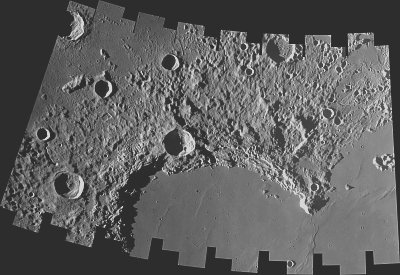 Very small thumbnail of the 9184 x 6312 pixel LROC mosaic study of Pre-Imbrium Sinus Iridum from which these smaller-scale higher resolution images were sampled. Iridum is centered near 45.0°N, 32.0°W and has an outer ring and full interior submerged by the northwestern Mare Imbrium basin melt. 39 km Bianchini crater straddles the Jura mountains on Iridum's rim, and Promonitorium Laplace stand out sharply in the long shadows three days following a Full Moon. A small part of Mare Frigoris stretches through the northwest. The landing site of Luna 17 (Lunokhod 1) is well outside the field of view. The entire scene exceeds 1000 km west to east, at an average 62 meters per pixel in full resolution (see below) [NASA/GSFC/Arizona State University].
Posted by Joel Raupe at 6:01 AM