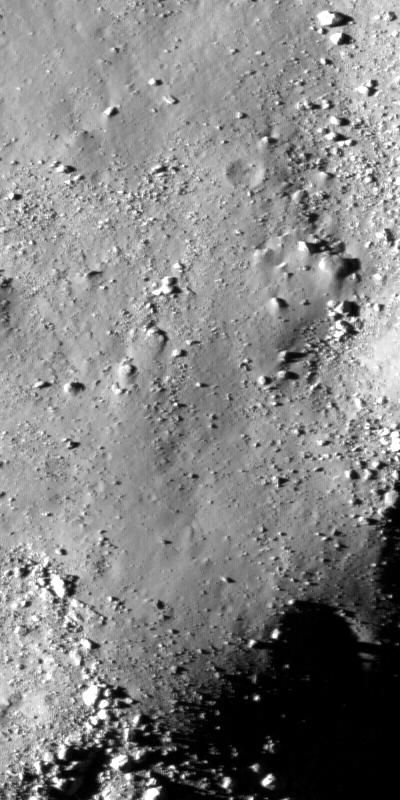 Tsiolkovskiy (185 km diameter) is a spectacular example of complex impact crater. It has a terraced rim, a central peak, and a floor flooded with mare basalts. Impact events release tremendous amounts of energy and result in very dynamic changes in the local landscape. Just after the initial impact, the central peak was uplifted from lower crustal rock, forming a giant mountain in the middle of the crater. Later large and small pieces of that uplifted rock rolled down and accumulated at the base of the slope -- just waiting for future lunar explorers to examine. This strategy was used by the Apollo 17 astronauts as an easy way to sample nearby mountain tops without having to climb to the top. Frequently it is easy to see where a boulder came from by following its tracks, a great clue to geologists reconstructing the local geology. The largest boulder in this image is about 40 meters wide - half as big as a soccer field! The dark area in the lower right is the tip of enormous shadow cast by the central peak.

Read the latest from the LRO Camera
Operations Journal HERE.
Posted by Joel Raupe at 10:48 PM