LCROSS Oct. 9 target is Cabeus A 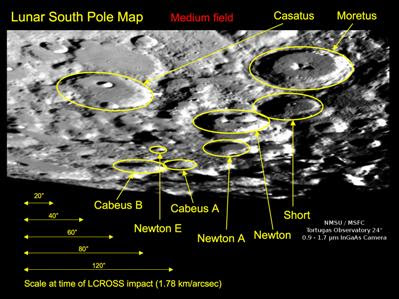 NASA Science News view shows Near Side south polar region and site of Cabeus A. Though the graphic is useful, maps projecting the apparent viewing angle of the target crater for LCROSS on October 9 demonstrate the somewhat surprising choice of Cabeus A is not so easy to sort out for Earth-bound less-experienced observers. [Full Size Image. NMSU/MSFC Tortugas Observatory.]
NASA's Lunar Crater Observation and Sensing Satellite (LCROSS) is racing toward a double-impact on the moon at 7:30 am EDT on Oct. 9th. Today NASA announced exactly where the crash will take place.

The target crater is Cabeus A. It was selected after an extensive review of the best places to excavate frozen water at the lunar south pole.

"The selection of Cabeus A was a result of a vigorous debate within the lunar science community. We reviewed the latest data from Earth-based observatories and our fellow lunar missions Kaguya, Chandrayaan-1, and the Lunar Reconnaissance Orbiter," says Anthony Colaprete, LCROSS project scientist and principle investigator at NASA's Ames Research Center. "The team is looking forward to wealth of information this unique mission will produce."

LCROSS will search for ice by plunging its spent upper-stage Centaur rocket into the permanent shadows of Cabeus A, where water might be trapped in frozen form. The LCROSS satellite will then fly into the plume of debris kicked up by the impact and measure the properties of the plume before it also collides with the lunar surface.

The LCROSS team selected Cabeus A based on a set of conditions that includes favorable illumination of the debris plume for visibility from Earth, where astronomers will be watching closely. Cabeus A also has a high concentration of hydrogen (a constituent of water, H2O) and favorable terrain such as a flat floor, gentle slopes and the absence of large boulders.

Professional astronomers will use many of Earth's most capable observatories to monitor the impacts. These observatories include the Infrared Telescope Facility and Keck telescope in Hawaii; the Magdalena Ridge and Apache Ridge Observatories in New Mexico and the MMT Observatory in Arizona; the newly refurbished Hubble Space Telescope; and the Lunar Reconnaissance Orbiter (LRO), among others.

Amateur astronomers can monitor the impact, too. Observing tips may be found here.