LPOD: 'a wetter hole' for LCROSS 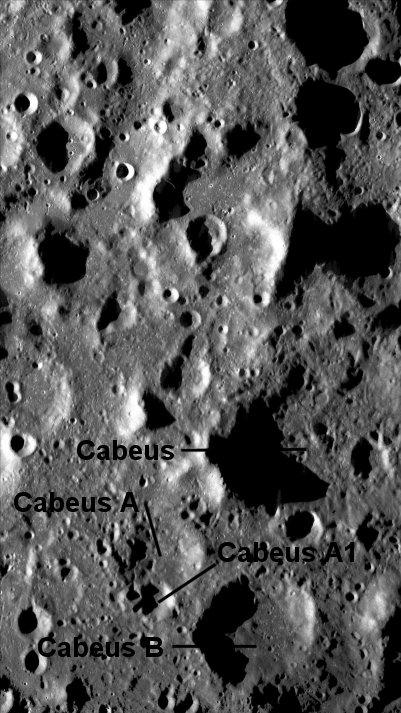 Cabeus: On initial examination, a section of earth-bound radar maps of the far southern hemisphere of the Moon, from Goldstone or Arecebo, shows the target zone for LCROSS, Oct. 9. Mission planners at NASA Ames have changed course from Cabeus A to Cabeus "proper" and are sticking with the choice of a target at a surprisingly higher latitude than LCROSS fans had long expected. Their reason for the choice is to make observations from Earth of the resulting plume easier (and for a longer period of time in the 100 seconds after the impacts) and recent verification by LRO instruments of "the strongest signature for hydrogen anywhere on the Moon" as originally mapped by the neutron spectrograph on-board Lunar Prospector in 1998. [Charles Wood, Lunar Picture of the Day (LPOD), via NASA-LCROSS Observation Campaign]
When Charles Wood lends his noted expertise to any earth-bound lunar observation exercise, particularly when he devotes a daily update to his prestigious Lunar Picture of the Day (LPOD) website to the subject area, then what is known about the target in question (and what we think we know) are covered, definitively.

"Nine days from now the Lunar Crater Observing and Sensing Satellite (LCROSS) will impact the Moon, aiming at a new target. On September 11 NASA announced that the site selected in the attempt for a positive identification of water would be a small crater on the rim of Cabeus A, informally labelled A1. But although "A1" usually means "the very best", that target seemed to not be the best and LPOD recommended that a larger crater with a higher chance of success be targeted. Now NASA has just announced that they have changed the LCROSS target, not to the LPOD recommended Cabeus B but to Cabeus itself. This is a great improvement, made in response to new topographic data from the Lunar Reconnaissance Orbiter and continuing analysis of existing Kaguya, Chandrayaan-1 and Lunar Prospector data..."
Read the Sept. 30 LPOD, HERE.
Posted by Joel Raupe at 6:24 AM