LROC: who slammed the barn door? 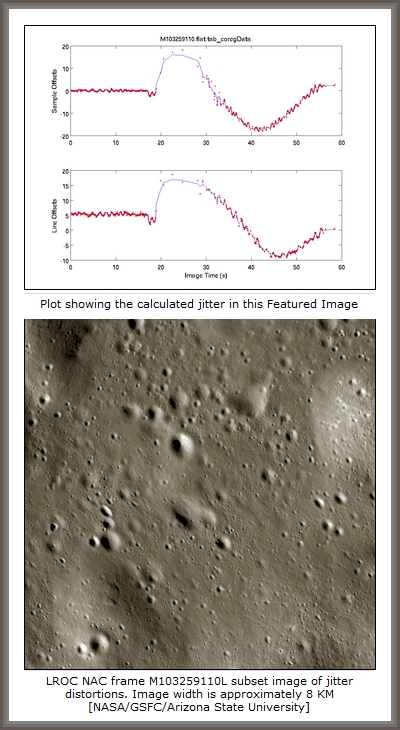 During the commissioning phase, several tests were planned to measure jitter in NAC images. Jitter is geometric distortion in the images caused by the motions of other instruments or mechanisms on the spacecraft. The NAC is especially sensitive to such motions because it is a push broom camera and has a high spatial resolution. A push broom camera builds the image line by line as the satellite flies over the ground. The speed at which each line is acquired is very fast, and is related to the pixel scale and orbital altitude of the spacecraft.

Most of the time we cannot see jitter in the imagery just by looking at the pictures. But on rare occasions, such as in this featured image (M103259110L), the jitter is visible as waves and wiggles about halfway down the image. We need to measure the location of objects on the ground that are in the overlapping portion of the NAC images. Each NAC image is made up of two halves that overlap for a few pixels in the center. We then plot the measurements of the pixels in the overlapping portion to quantify the jitter. The plot below shows the measurements in pixels (y-axis) of how far the registration point (a pixel in one half of a NAC pair) deviates from its expected position in the other half. The red points are the actual data points. The blue line is a smoothed fit. The x-axis is image time in seconds.

Browse the full-resolution NAC strip
and find the jitter for yourself, HERE.
Posted by Joel Raupe at 4:16 AM