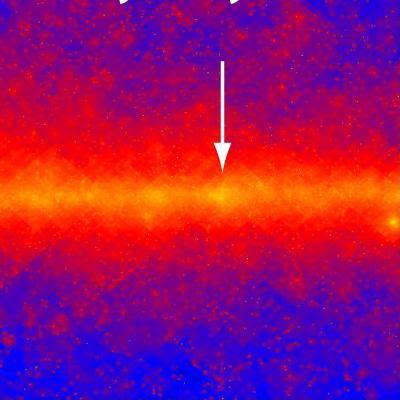 Galactic Center as seen from Fermi Telescope (All-Sky, first light, 2008) "Cosmic rays were discovered in 1912 by Victor Hess. He was trying to test the theory that most of the Earth's radioactivity came from the ground, so he took three detectors up to 5300 meters in a hot air balloon, expecting a decrease in the ionization rate. Instead, he found an increase, indicating the primary source of radiation was coming not from below, but from above. Hess thought that he was observing high energy photons, hence the name "cosmic rays." When a cosmic ray strikes a molecule in the atmosphere, it produces a cascade of lighter particles. Initial collisions produce exotic particles like pions, but by the time the shower has reached the ground, these particles have decayed, and we're generally left with several common byproducts -- muons, electrons, neutrons, neutrinos, and gamma rays." (Icecube.wisc.edu) Beyond Earth's atmosphere, at the mercy of the Sun's interplanetary magnetic field and that of Earth, in "deep space," astronauts are assessed individually to determine their risk, over a lifetime, of Radiation Exposure Induced Death, or "REID." When that risk reaches four percent, they are grounded.
Too much radiation for astronauts to make it to Mars
David Shiga
New Scientist

"FORGET the risk of exploding rockets or getting sideswiped by a wayward bit of space junk. Radiation may be the biggest hurdle to human exploration beyond low-Earth orbit and could put a damper on a recently proposed mission to Mars orbit."

Why Norm Augustine’s Review of Human Space Flight committee reportedly included in their report to the President a trip to Phobos, and lingering in Mars orbit twenty years from now, among their possible long-term alternatives to a more immediate return to the Moon is a mystery to us.

Like everyone else we will have to wait for a closer look at the Committee’s final report. This is because the Lunar Pioneers have been echoing conclusions affirmed and reaffirmed by experts over decades, that manned spaceflight beyond our Moon is unlikely to become safe anytime soon without the kinds of technological breakthroughs we believe only frequent travel to the Moon is likely to make possible.

There is no question of our capability of going to Mars, and the Pioneers estimate the trip would not have to be nearly as expensive as estimated. Returning safely from Mars, if by “safely” you mean “alive,” is also very doable. But there is one problem we have yet to learn our way around.

If you want to go to Mars, you will need nuclear energy or something faster and more sustained than your grandfather’s chemical rockets. Otherwise the dangers posed by Galactic Cosmic Rays, or "GCR's," is both real and unavoidable.

One practical kind of shielding might be an 11-meter thick shell of lunar regolith.

This reality was explicitly highlighted in two reports chartered by NASA and delivered by the National Academy of Sciences following President George W. Bush’s establishment of the Vision for Space Exploration as national policy in 2004.

In the very influential "Scientific Context for the Exploration of the Moon" - Final Report (2007), and, in more detail, “Managing Space Radiation Risk in the New Era of Space Exploration” (2008), the Space Studies Board used NASA’s own measure of radiation exposure risk assessment as the gauge, and their conclusions were clear.

Every astronaut is individually assessed, based on their age and lifetime experience, living or flying at high altitudes, or how often they flew using polar routes, etc., and the probabilities are crunched to come up with that person’s own lifetime risk of Radiation Exposure Induced Death, or “REID.” Anytime a prospective space flight is estimated to take an astronaut beyond a 4 percent probability of REID, they are grounded.

In fact, your career is likely over long before reaching a 3 percent lifetime risk of REID.

Interestingly, the older you are, with only a moderate estimated time at high altitude during your lifetime, the lower the REID, because The Great Bird of the Galaxy is going to catch up with you a lot sooner from one of the many "manifold dooms" than when you were a adolescent. The risk is estimated on a cumulative basis, so an individual astronaut’s risk of REID is proportionally lower then if they had traveled in space beginning at a younger age.

Back in the Apollo Era the danger people at home worried about most was presented by the Sun and solar flares, and not without some reason. But the danger we can’t get around when traveling beyond the Moon is not coming from the Sun.

Solar radiation and solar particle events (SPEs) are hazardous to your health, but the kinds of shielding, comparable to hull materials measured in units of aluminum per square centimeter has proven to actually provide a high degree of protection from the Sun’s most common dangers.

The dangerous radiation that concerns scientists today when we talk about deep space travel and human health is far more energetic, even if it is less frequent, immediate, or even apparent to the human eye.

If you had gamma ray eyes, you could see the problem all over the sky, just like the Fermi Telescope launched in 2008; along the band of the Milky Way, from supernovae remnants like the Crab, or a curiously swath with no apparent origin coming at us from the area of sky northeast of Orion. Generally speaking, however, Cosmic rays rain down at us from every possible direction.

"Cosmic rays are mostly high-energy protons, with some electrons, positrons and heavy nuclei mixed in. Their energies range over 14 orders of magnitude, with the most energetic cosmic rays flaunting a billion times more energy than is possible in man-made particle accelerators on Earth.

“The current understanding is that most cosmic rays originate in the shock waves that emanate from supernova explosions. We can't precisely trace where a cosmic ray came from because its trajectory is bent by magnetic fields. In fact, a typical cosmic ray will bounce inside the galaxy's magnetic field for millions of years before eventually colliding with something… like Earth.

"Every square centimeter on the top of the Earth's atmosphere is hit by several cosmic rays per second," and, "this is forever going on."

“None of these "primary" cosmic rays ever reach us on the ground. Instead, they collide with atoms in the upper atmosphere, creating a shower of lower energy "secondary" particles.

“At sea level, the majority of cosmic ray secondaries are highly penetrating muons. About 10,000 muons pass through our bodies every minute. Some of these muons will ionize molecules as they go through our flesh, occasionally leading to genetic mutations that may be harmful.

“At present, the average human receives the equivalent of about 10 chest X-rays per year from cosmic rays. We shouldn't be alarmed by this, since it is just part of the natural background radiation under which humans and our ancestors have been exposed to for eons. Indeed, cosmic-ray-induced mutations may sometimes be beneficial,”

All of which is true, we suppose, if you think in terms only of your species, and never traveling beyond the blue sky. Our best estimates are that every person on-board a vessel traveling to Mars and back, however, using present-day shielding and our best possible speeds, return to Earth with a greater than 4 percent chance of eventually dying of radiation induced death.

To make things tougher, the hull design most likely to shield you from the Sun’s worst punches is very likely to worsen the danger posed by Cosmic rays. A metallic nucleon, atomic Iron or Beryllium, or whatever, would encounter the same degree of Aluminum per square centimeter and immediately become a shotgun spray of secondary and tertiary particles, about the size of your head, and multiplying the genetic risk proportionally.

It takes a lot to stop the highest energy Cosmic rays.

To make things even tougher still, although it is unlikely to last forever, we are presently experiencing the deepest solar minimum since 1913. At solar maximum, when the interplanetary magnetic field is at its greatest strength, incidence of Cosmic rays at Earth is reduced by as much as 60 percent.

Alternatively, we are at the present solar minimum, and after fifty years of monitoring the cosmic ray bombardment here at one-Earth distance from the Sun, we discover that the incidence of Cosmic rays today are at their highest sustained levels ever recorded. The last such peak recorded was of a far shorter duration and happened during the solar minimum of the middle 1960’s.

Obviously, now would not a good time to travel to Mars. So, what about the Moon?

For those who want to go to Mars the problem of REID must be tackled, and the Moon, as always, waits patiently to provide an excellent testing ground, with many necessary materials already in place.

Standing on the Moon, during those three-quarters of a lunar day periods when the Moon is not within trailing field lines of Earth’s magnetic field, half the incoming Cosmic radiation is blocked by the Moon itself, at your feet. To retreat entirely from this radiation would require, some estimate, at least 11 meters of lunar regolith, all around you. This is a difficult, but not impossible, proposition.

Transported through deep space surrounded by 11 meters of lunar quick-crete might seem prohibitive if launched from Earth. But, using rail-gun technology, such a feat might not seem so ridiculous beginning from the Moon.
Like the Moon, Cosmic rays presents the space wanderer with an immovable object,"so high you can't get over it, so low, you can't go under it, so wide, you can't go 'round it... must go through that door."
Posted by Joel Raupe at 11:08 PM