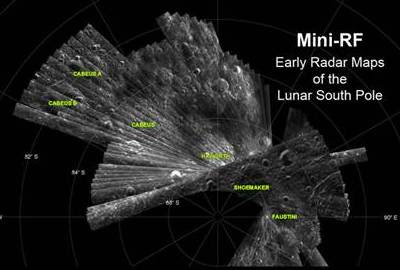 That outlook is gaining momentum via a wealth of new scientific measurements gleaned by an international armada of moon-orbiting scientific scouts, including a report last week that craters near the lunar poles, always in shadow, may harbor water ice.

Such a prospect could fuel those eager to send human explorers back to the moon, to establish a base camp there, and to hone talent and hardware for jumping off to other destinations.

Locating, mining and processing polar deposits of water ice on the moon, it is reasoned, would add up to a useful resource for future lunar inhabitants.

The idea of ice in the floors of sunlight-shy polar lunar craters was first aired in 1961 by Caltech researchers Kenneth Watson, Bruce Murray and Harrison Brown. In the late 1970s, James Arnold of the University of California, San Diego, suggested that comets and water-rich asteroids crashing into the moon could deposit water to the lunar surface.

Still, is the chatter about new lines of evidence supportive of water ice at the lunar poles a slam-dunk situation?

"If ice is found we have to further explore it with landers, rovers, coring drills to assess its distribution and composition," explained Bernard Foing, project scientist for the European Space Agency's now-defunct SMART-1 lunar orbiter. Foing is also the director of the International Lunar Exploration Working Group.

After such an assessment is made, the next task would be to figure out how ice could be partly exploited on the spot in some areas to ease the next steps of human exploration toward an international lunar base, Foing said.
Read the Article HERE.
Posted by Joel Raupe at 9:51 PM