'Art and science in dialogue' 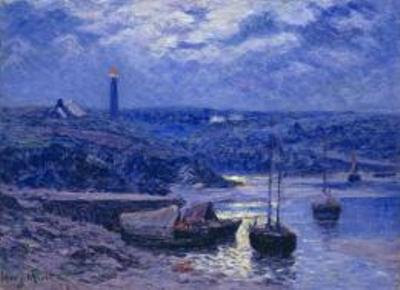 Henry Moret's Night in Doëlan (1909) is part of the exhibit The Moon: “Houston, Tranquility Base Here. The Eagle Has Landed.” at the Museum of Fine Arts, Houston.

Thanks to NASA, no city on Earth is more closely associated with the moon than Houston, which has spent the past couple months celebrating the 40th anniversary of the lunar landing.

So when Helga Kessler Aurisch, associate curator of European art at the Museum of Fine Arts, Houston, learned a German museum was presenting an exhibition on how scientific advancements since the Renaissance have changed how artists see and depict the moon, she knew she wanted to bring it here.

“I brought the idea to the attention of our director (Peter C. Marzio), and he said, ‘I don't see how we can't do it,' ” she said. “So we scrambled. And unlike our general, very pedantic and thorough way of doing things, we really hustled. And within months, here we are, instead of years.”

The Moon: “Houston, Tranquility Base Here. The Eagle Has Landed,” opening today, brings together about 130 paintings, photographs, treatises, telescopes, and lunar maps and globes.