The extreme dryness of the Moon is established scientific dogma. The study of Apollo rock and soil samples pretty much had convinced scientists that the Moon has no water. Because its surface is in a vacuum and experiences extreme temperature swings at the equator (from -150° to 100° C), the Moon was believed to have a bone dry surface. Moreover, minerals that make up the lunar rocks not only have no water, but crystallized in a very reducing, waterless environment, indicating no significant water at depth.

Yet, some irritating facts suggested that the whole story was more complicated. Water is being added to the lunar surface. We know the Moon is bombarded with comets (mostly water ice) and meteorites rich in water-bearing minerals. Additionally, the solar wind (mostly hydrogen atoms or protons) constantly hits the surface, implanting itself into the dust grains and a possible source for the creation of water. An experiment laid out on the surface by the Apollo astronauts observed water vapor after the crew left the Moon. It was thought this vapor might be latent out-gassing from the Lunar Module descent stage, but scientists couldn’t be sure.

So what happens to all this water? Most of it is thought lost to space by a variety of processes, including dissociation by sunlight, thermal loss from the extremely high daytime temperatures, and sputtering induced by the impact of high-energy particles from space. Some areas near the poles of the Moon are permanently dark and cold, so if any of this stray water happened into them, they would be “trapped” forever in the dark areas. And although an extremely slow process, over millions of years a considerable amount of water ice might accumulate. But we don’t know how much water is made and how much might be present on the Moon.

Just published results from spectral mapping instruments on three different spacecraft indicate the presence of large amounts of either water or the OH molecule in the soils of the Moon. This water is present at high latitudes at both poles and occurs in sunlit areas (these instruments rely on reflected sunlight). Although the authors of these new results don’t understand the source of this water, they favor the creation of water by the interaction of solar wind with surface minerals. Solar wind protons reduce metal oxides in the soil, creating free metal (usually pure iron, Fe0) and water. The M3 Team suggested that this water might act as a source for the water believed to be trapped in the dark polar cold traps.

What’s surprising about this new data is not the presence of water, but its pervasiveness. The published image (below) shows this water to be present from the poles down to about 60° latitude. This area subtends over 10 million square kilometers, or about one-third the surface area of the entire Moon! Although the water appears to be present only in the upper few millimeters of the surface, its total mass could be enormous, greatly exceeding the several hundred million tones estimated to be present as ice in the dark areas of the poles.

As always with good science, the new results raise many more questions than they answer. In part, this is a “chicken or egg” issue – do the newly discovered deposits result from surface alteration by water derived from the polar ice, or do they serve as a source for such deposits? How does water form, move, get destroyed or get cold-trapped on the Moon? What are rates of water deposition and removal? What and where are the ice deposits and how pure might they be? Right now we can only dimly perceive the beginnings of a whole new sub-discipline of lunar studies: polar geoscience.

This exciting story isn’t over. More developments in this field are on the horizon. Results from other experiments carried aboard the Chandrayaan-1 spacecraft, including my own Mini-SAR imaging radar, have yet to be fully reported. The American Lunar Reconnaissance Orbiter (LRO) mission is settled into its mapping orbit and will be examining the Moon in detail over the next couple of years. Every time we get new data from the Moon or examine and map it with some new technique, we learn new and surprising facts.

In a future post, I’ll examine the implications of large amounts of lunar water for human return to the Moon and the possibilities for a permanent sustainable presence on our nearest planetary neighbor. 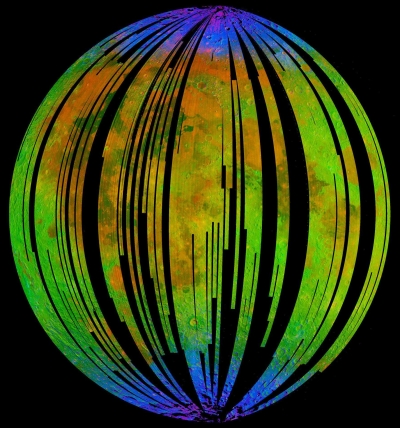