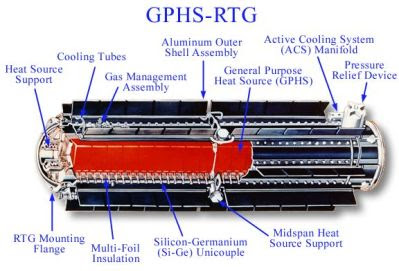 GPHS-RTG that are used for Galileo, Ulysses, Cassini-Huygens and New Horizons [NASA-JPL]
Heads up to RLV and Space Transportation News, for "Effort to restart plutonium-238 production struggling in Congress."

"A request of $30 million by the administration to initiate a program to restart production has been eliminated in Senate legislation and reduced to $10 million in the U.S. House," Topspacer reports.

In a report available online, issued jointly, the Aeronautics and Space Engineering and Space Studies boards wrote, "for nearly 50 years, the United States has led the world in the scientific exploration of space. U.S. spacecraft have circled Earth, landed on the Moon and Mars, orbited Jupiter and Saturn, and traveled beyond the orbit of Pluto and out of the ecliptic. These spacecraft have sent back to Earth images and data that have greatly expanded human knowledge, though many important questions remain unanswered."

"Spacecraft require electrical energy. This energy must be available in the outer reaches of the solar system where sunlight is very faint. It must be available through lunar nights that last for 14 days, through long periods of dark and cold at the higher latitudes on Mars, and in high-radiation fields such as those around Jupiter. Radioisotope power systems (RPSs) are the only available power source that can operate unconstrained in these environments for the long periods of time needed to accomplish many missions, and plutonium-238 (238Pu) is the only practical isotope for fueling them. The success of historic missions such as Viking and Voyager, and more recent missions such as Cassini and New Horizons, clearly show that RPSs—and an assured supply of 238Pu—have been, are now, and will continue to be essential to the U.S. space science and exploration program."

Cassini's mission to Saturn has been sending spectacular images of that planet's rings as they pass through a near-perfect solar phase-angle as that planet travels through equinox, revealing never-before-seen details of that mysterious system five years after the school-bus sized probe arrived in Saturnian orbit and and ten years after it launch from Kennedy Space Center.

Meanwhile, ten years after it's fastest-ever departure from Earth, New Horizons will encounter Pluto and it's three known moons in 2015.
Posted by Joel Raupe at 6:12 PM