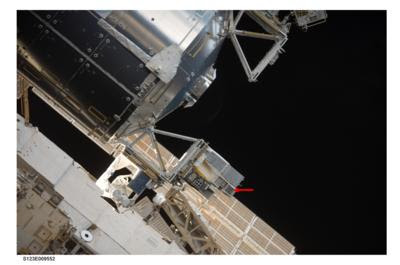 Speeding along in orbit at more than seven kilometers per second, the International Space Station has its surfaces carefully shielded against potentially catastrophic collisions with micrometeoroids or man-made debris. Except that is for a trio of unprotected panels until recently attached to external payload platform of ESA’s Columbus module, specifically intended to sustain impacts from tiny specks of space dust.

Each pointing in a different direction – forward in the direction of orbit, upwards and sideways out to space - the three 10 by 10 cm aluminum foil panels formed the sensor units of an instrument called the DEBris In-orbit Evaluator-2 (DEBIE-2), returning telemetry on impact events to a separate data processing unit.

These units were sited on the European Technology Exposure Facility (EuTEF) which was mounted on the Columbus exterior until returned to Earth on the Space Shuttle this week. Columbus is an ideal position for impact monitoring since the module forms part of the leading edge of the International Space Station (ISS).

There are around 13 000 cataloged pieces of orbital debris larger than 10 cm across. These are big enough to be tracked by terrestrial radar so the ISS, the Shuttle and other satellites can manoeuvre out of their path. In addition there are many millions more items too small to be monitored from the ground. Traditionally most of what is known about these orbital populations has come from simply examining space hardware returned to Earth and counting the number and size of impact craters they have sustained while in orbit.

However the DEBIE system actively measures impact energies and velocities as strikes occur. Possessing only a limited detection area – three times 100 cm2 – the instrument is designed around impacts from particles around a micrometre (a thousandth of a millimeter) in size, the type of debris about which least is known.

Around the same size as smoke particles, they may be tiny but their effect is still dramatic: impacting at hypersonic velocities, they briefly heat the aluminum foil locally to thousands of degrees Kelvin, hotter than the surface of the Sun.
Rread the ESA review HERE.
Posted by Joel Raupe at 7:54 PM