Even a five-year old Olympus can do it 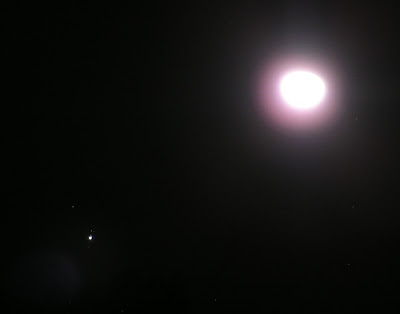 For our 1,600th post, here at the Network, last evening's close conjunction of the Moon with mighty Jupiter afforded a cheap opportunity to illustrate a couple of important principles. Obviously, the waxing Moon is over-exposed but even within the 400 px confines of a blogger column, in this 'thumbnail' of the original you don't have to strain too hard to see Jupiter's Galilean Moons, each comparable in size to Earth's Moon, but nearly a billion kilometers farther away. This shows what anyone with a decent consumer camera (though not yet many cellphones) can accomplish with minimal effort.

The Charge-Coupled Device (CCD), originally developed to be the heart of camera miniaturization as a part of the first race to the Moon, and every-afterward improved upon by industry and NASA for all the applications where its used in space and at family picnics, is a NASA "spin-off." Some people take this for granted, but I am cursed not to be able to un-think about this every time I see any digital camera at work, whether in orbit around Saturn, Mars and the Moon or in a cellphone at the beach.

It's the "minimal effort" I am most grateful for, due to the sweat and deadlines that went into developing the camera that allowed me to watch "in color" as Pete Conrad and Alan Bean stepped out onto Oceanus Procellarum during the Apollo 12 mission, forty years ago this November.

Of course, I also remember about twenty minutes later when that camera was inadvertently and ever-so-briefly aimed at the Sun, at the horizon behind the lunar module. The live televised broadcast from the lunar surface was over. Somehow, the audio alone was just not as compelling, though I did continue to listen, faithfully, hoping for many hours after that somehow Conrad & Bean would get that camera working again. (Lord knows they tried, to the point where Pete Conrad actually rapped the camera with his rock hammer!)

It was toast, however, and everyone accepted this long before I did. Unfortunately, because of that brief mistake and later the Apollo 13 accident the following April in 1970, more than a year would have to pass before Alan Shepherd and Edgar Mitchell returned to the Moon for only the second opportunity for live color television showing humans exploring (and golfing) on another world.

No one can estimate today how these two events, Apollo 12's camera burned-up and then the Apollo 13 near-fatal accident, may have added to forces that cooled the ardor for lunar exploration.

The principles illustrated here, you ask? They are more than I can list, really, except for a warning to take necessary time to do the best you can with what you have, to appreciate how unlikely, how improbable, is existence and life itself, let alone having a Moon that so precisely aligned that it frequently blots out the entire Sun, 93 million miles away and 400,000 times larger than the Moon, in a primary shadow that easily converges in a cone whose tip barely reaches the surface of Earth, and at times we can forecast with great accuracy many years in advance.
Posted by Joel Raupe at 8:13 PM