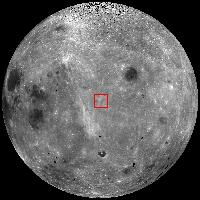 
Radial streaks which extend out from impact craters are called rays, and are commonly observed on the surface of the Moon, Mercury, Mars, and satellites of the outer planets. Today's Featured Image highlights a tiny crater (about 30 meters diameter) with clearly visible rays composed of high reflectance material, and is about 70 km east of Meshcherskiy crater (60.2 km in diameter). The small crater is located on the ejecta blanket of unnamed immature (young) crater about 8.7 km in diameter. It appears to have excavated through an impact melt deposit at 3.4 km from the rim of this fresh and larger crater.

The small crater rim exhibits many blocks (boulders), which indicates the target material was composed of hard material (in this case hardened impact melt from the 8.7 km crater). Perhaps the rays were formed as late stage ejecta was directed around the blocks on the rim? So many craters to investigate? One lesson from the NAC images is that small craters are expressed in many forms dependent on target material, impact angle, impact speed, and perhaps other unknown factors!

The final shape of a small crater is greatly influenced by the mechanical properties of the target material (e.g. Regolith on Basalt, Fresh Bench Crater in Oceanus Procellarum, Just Another Crater?, Bench Crater in Plato, Crater Covered With Boulders!). As mentioned above, today's Featured Image crater is located on the impact melt sheet produced from the adjacent unnamed immature crater. The layered structure of target surface, which might consist of rigid and brittle impact melt on top of unconsolidated ejecta debris, both originating from the larger crater, could have contributed to the rays of the smaller crater.


Explore the rays of this tiny crater and surrounding morphology/geology by full NAC frame yourself, HERE.