Of lunar rovers and rockets 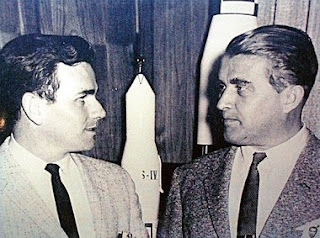 Wernher von Braun and Jewell Moody, left, started working together in Huntsville in the early 1950s. In 1972 Moody received the NASA Exceptional Service Medal, which is the second highest award in the NASA Incentive Awards Program. It is granted for significant achievement or service characterized by unusual initiative or creative ability that clearly demonstrates substantial improvement in engineering, administrative, space flight, or space-related endeavors which contribute to NASA programs.


FAIRHOPE, Alabama -- Jewell Moody, 83, is a builder of things. Not many people can put on their resumè that they built a lunar rover or that they were truly a rocket scientist.

Moody worked with Wernher von Braun and his crew of German scientists starting in 1952. Recently a celebration was held in Huntsville, celebrating what would have been von Braun’s 100th birthday, had he lived — he died in 1977.

Moody remembers von Braun as a very “religious and kind man,” one who took the time to personally send a letter to Moody when his 14-year-old daughter was involved in a life-threatening school bus accident.

Von Braun came to the United States after a devastating war with Nazi Germany. Considering evidence that Germany would not achieve victory in World War II, von Braun began thinking about the postwar era. He participated in the surrender of 500 top German rocket scientists and the rocket information to the Allies.

Before the Allies actually captured the German V-2 rocket complex, von Braun’s team was secured and sent to the United States. In 1950, his team was relocated from Whites Sands Proving Ground, N.M., to Redstone Arsenal near Huntsville.

Moody was about to enter the picture and become a vital part of a historical phase for America.

Read about this Pioneer, HERE.
Posted by Joel Raupe at 4:00 AM