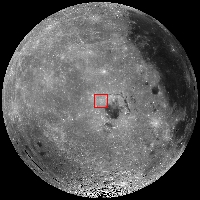 
Today's Featured Image is a beautiful example of a viscous flow on the Moon. What appears to be one large flow that traveled down Lowell crater's wall is, upon further inspection, two distinct lobes!

A section of the first lobe was breached or overrun by a second flow, allowing the flow to progress further.

If it was caused by a breach, this might be similar to how pahoehoe lava flows on Earth inflate and break out to expand. Several other impact melt flows show similar relations, but in most cases impact melt flows with morphologies like this occur exterior to craters.

So why is this flow inside a crater?


Looking at the WAC context image, there is a small crater on the edge of Lowell crater. This smaller crater might be the source of the impact melt! If so, this particular impact melt flow wasn't generated in the same impact event that created Lowell crater. Instead a later impact occurred on Lowell's rim and melt flowed back into Lowell crater. But the overlapping flows indicate there must have been two pulses of melt flowing downward. Perhaps during the impact an initial glob of impact melt was thrown downslope and then quickly followed by a second flow!