LROC: Trapped at the Bottom 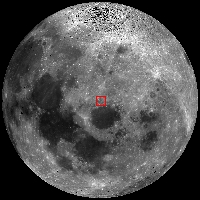 
Examine the larger craters on the Moon and you will find that many of them have a tall mountain in their centers. These are known as "central peaks" in the vernacular of impact crater morphology, and are the result of a rebound effect that can accompany an impact after compression and excavation of the central region.

However, rebound peaks do not form in small craters where the strength of the target rock does not permit that kind of plastic deformation.

Smaller craters tend to be more bowl-shaped without prominent structures on their floors.


Why then do we see a positive relief feature at the bottom of this small (1.4 km diameter) crater (26.697°N, 56.352°E) inside Cleomedes crater near the Sea of Crises? There are several processes that a planetary scientist will consider when tackling a problem like this. In addition to its role in the formation of large impact structures, NAC images show that impact melt is created in much smaller impact events than previously thought. If enough impact melt is generated during impact, it can accumulate on the floor to form a pond. Subsequent mass wasting and regolith development can hide the original melt deposit. However dry debris alone is unlikely to produce a positive relief structure, and is unlikely to flow radially and smoothly so that the deposit has even contributions from the full circumference of the crater walls.

The morphology of impact craters can be influenced by the target material and properties. For example, when a weak layer of material (a thin regolith layer, for example) overlies a stronger layer (mare basalt flows), a central mound can form due to the strength discontinuity between target materials. So instead of a bowl-shaped crater, the crater that forms has a positive relief mound on the crater floor. Many crater morphologies observed during the pre-Apollo and Apollo eras were reproduced by impact experiments completed in the 1960s and 1970s!


Ultimately, the mound on the crater floor may have formed from a combination of several factors and processes, not all of which are fully understood. Certainly once at the bottom of such a closed depression, any loose debris will find it difficult to escape unless ejected by another impact! What additional clues would you look for to learn the true cause of this structure?


Several additional similar features can be found when examining the full NAC frame, HERE. The following posts show examples of other small craters: Brayley G, Fresh Bench Crater in Oceanus Procellarum and Crater Covered with Boulders!
Posted by Joel Raupe at 3:14 AM