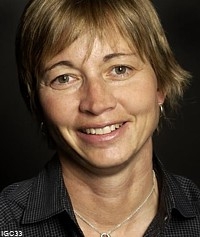 Geophysicist Maria T. Zuber applied her knowledge of Earth science to one of the world’s most universally studied astronomical bodies—the moon—at this year’s annual Neekeyfar Lecture on Math and Science, hosted Tuesday, April 17, 2012 by the (Harvard University) Undergraduate Council’s Student Advisory Board on Science.

Zuber, E.A. Griswold Professor of Geophysics at MIT, focused on her work on planetary phenomena in the moon’s interior and lunar surface modeling at the talk, titled “Journey to the Center of the Moon.”

Zuber related her experiences with lunar geophysics to the NASA Gravity Recovery And Interior Laboratory (GRAIL) mission, which launched for the moon in September 2011.

In particular, Zuber explained the details of how to go from research projects in the lab to an applied astronomical endeavor.

Zuber explained to the audience, which ranged from curious undergraduates to astrophysics concentrators and professors, that the moon’s surface consists of two types of rock. One type, anorthosite, or white rock, represents the areas of the moon’s surface that were once covered by the lunar magma ocean.

The other type is basalt, or black rock, whose formation is indicative of lava flows from volcanic melting in the moon’s distant past. Zuber mentioned that the discovery of the once-present magma ocean is considered one of the greatest fruits of the Apollo Mission.

Early in the Earth’s history, Zuber said, it was hit by a Mars-sized object that struck at a sharp angle, tearing off a piece of the Earth’s mantle and sending it into the atmosphere.

Over time, the piece of the mantle folded into a disk and then condensed into the modern-day moon.

The moon also has a rich history of “impact events” or being hit by giant rocks, as indicated by the numerous craters scattered across its surface.

The biggest crater, or impact basin, is on the side of the moon not visible from Earth. This impact basin is two-thirds the width of the United States and is 8 km deep.

One still-unanswered question Zuber discussed was why the near side of the moon is topologically different from the far side. One theory is that the differences are caused by internal lunar activity.

“If you’ve sent 109 space crafts that have essentially mapped the surface and brought back samples, and you haven’t found the answer, then you’re probably not looking in the right place,” she said.

This internal activity could include phase changes in matter, causing fluctuations in energy flow and distribution, as well as “moon quakes” that occur more often when the moon is closest to Earth.

In her research, Zuber works to study the moon’s gravitational field by increasing the resolution of imaging on the moon.

“The results are really transformative when you can improve measurements by three orders of magnitude or better,” said Zuber.

However, she feels her most profound contribution to society stems from her ability to engage the minds of the future. As part of her GRAIL mission, she incorporated cameras on her spacecraft specifically devoted to educating students around the country. The students use online software to monitor the location of the spacecraft in orbit and look at images.

“I want to teach kids physics is not only interesting but also fun,” said Zuber.

According to Deana Ste. Marie, Executive Assistant to the Dean of Science and an advisor to SABS, said that this year, students were able to spend time with Zuber in breakout sessions throughout the day, which proved to be “engaging and rewarding.”

Attendee and one of the event’s organizers, Alexander L. Jaffe ’15, who is also a member of SABS, enjoyed hearing about brand new topics from such a renowned expert.

“The subjects covered were some that I had no experience with before,” he said. “To hear about them, especially from a first hand research project, was fascinating.”
Posted by Joel Raupe at 11:39 PM

nice opinion.. thanks for sharing.