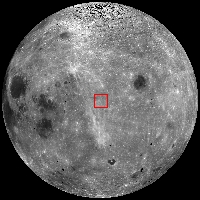 Today's Featured Image explores the southern rim of an unnamed crater ~2 km in diameter, located near Olcott crater. The distinctly asymmetric ejecta shape (seen in the WAC image below) suggests that this crater resulted from an oblique impact. The impactor arrived traveling from the NNE to the SSW, thus the southern side of this crater is downrange.

In the image above, the upper portion (brighter area exposing high reflectance materials) corresponds to the inner slope of the crater cavity. The rim of this crater is covered by low reflectance material. The features of this dark material, such as the flow lobe at image bottom, fragmented pattern at the upper boundaries, and the cracks inside the dark areas, suggest that the material is impact melt.


The entire southern half of this crater rim is covered by impact melt, suggesting that the impact melts were splashed downrange (relative to the direction of the original impact) and covered much of the southern rim. Can you imagine the dynamic the nature of this impact event?


You can see the whole rim of this oblique impact crater in full NAC frame HERE.