In February published reports confirmed a goal for launching Chandrayaan-2 in 2013 were push back to at least 2014 (See "Chandrayaan-2 may miss 2013 launch date," February 21).

"It is an Indo-Russian collaborative mission," according to the wide-ranging Report. "The scientific objectives of the mission are to further improve our understanding of the origin and evolution of the Moon using instruments on-board an Orbiter together with in-situ analysis of samples and studies of lunar regolith by both remote and direct analysis.

"India and Russia are cooperating to realize a joint unmanned moon mission with India responsible for launch," the Orbiter and Rover and Russia responsible for the Lander. "Significant progress has been made in the past year," according to the Report, "wherein both sides discussed Orbiter-Lander-Rover configuration" and joint mission operations.

"Indian instruments on both the Chandrayaan-2 Orbiter and Rover have been finalized, and both nations are working to launch Chandrayaan-2 in 2014 using India’s GSLV booster. 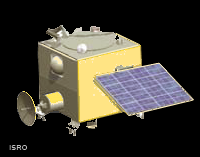 The Chandrayaan-2 Orbiter configuration has been changed from a 12 to 13k design after additions to the payload capacity of India's indigenous Geosynchronous Satellite Launch Vehicle (GSLV), enabled by larger propellant tanks.

The Chandrayaan-2 mission outline was revised to inject the vehicle bus into a lower initial orbit (170 X 16980 km) and higher lift-off weight of 3200 kg. Propulsion system has been adapted to increase fuel capacity.

The ISRO Annual Report appears confident tasks related to the development of the Chandrayaan-2 lunar rover that have been completed include configuration of Rover and instrument payload, and Preliminary Design Review of all subsystems on both the Orbiter and Rover.

A Lunar Terrain Test Facility has been set up at the Maratahalli Campus in Bangalore, an integration and testing facility for spacecraft larger than 4 tons, where testing in micro-gravity and lunar surface simulations will soon begin..

The Chandrayaan-2 Orbiter and Russian-GK Lander Craft (LC) together with the LC and Rover interfaces were finalized this past year in three face-to-face meetings with Russian delegations, "apart from regular mail communication and teleconferences," according to the Annual Report.

Landing site identification "has been initiated," and future workflow schedules "have been "worked out."
Posted by Joel Raupe at 1:09 AM