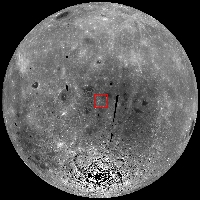 
When an impact event deposits an ejecta blanket, nearby craters of all sizes are buried or modified. Larger craters may be preserved, while smaller examples are obliterated. In the case of today's Featured Image, a nearby impact covered the area and erased any craters that previously existed. Currently only small impact craters dot the landscape, but must have been emplaced after the ejecta blanket was deposited. In fact many of these small craters may be auto-secondaries; craters that formed as late stage blocks of ejecta landed on the just formed ejecta (all from the same impact event). Because these impacts are so few, and so small, the ejecta (and corresponding parent crater) must be very young.


Copernican aged craters are defined by their fresh morphologies and bright ejecta, and the ejecta blanket's source crater has both. But even Copernican aged craters have a long formation history as they include any crater formed since Copernicus crater 800 million years ago. This unnamed crater is almost certainly younger than that!

How does the featured unnamed crater compare to known small fresh craters on the Moon? Check out the full LROC NAC frame HERE, and related posts below to find out!