Getting to the Moon on Drops of Fuel 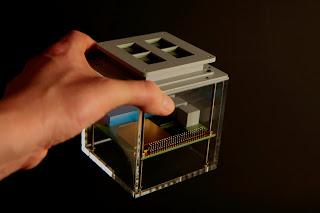 The first prototype of a new, ultra-compact motor that will allow small satellites to journey beyond Earth's orbit is just making its way out of the EPFL laboratories where it was built. The goal of the micro motor: to drastically reduce the cost of space exploration. The technology could aid in developing future astrobiology missions to locations beyond the Earth, helping scientists study life's potential in our solar system.

Imagine reaching the Moon using just a tenth of a liter of fuel. With their ionic motor, MicroThrust, EPFL scientists and their European partners are making this a reality and ushering in a new era of low-cost space exploration. The complete thruster weighs just a few hundred grams and is specifically designed to propel small (1-100 kg) satellites, which it enables to change orbit around the Earth and even voyage to more distant destinations – functions typically possible only for large, expensive spacecraft. The just-released prototype is expected to employed on CleanSpace One, a satellite under development at EPFL designed to clean up orbital debris, and on OLFAR, a swarm of Dutch nanosatellites that will record ultra-low radio-frequency signals on the far side of the Moon.

The motor, designed to be mounted on satellites as small as 10x10x10 cm\3, is extremely compact but highly efficient. The prototype weighs only about 200 grams, including fuel and control electronics.

"At the moment, nanosatellites are stuck in their orbits. Our goal is to set them free," explains Herbert Shea, coordinator of the European MicroThrust project and director of EPFL's Microsystems for Space Technologies Laboratory.

Small satellites are all the rage right now because their manufacturing and launch costs are relatively low – about half a million dollars, compared to conventional satellites that run into the hundreds of millions. But nanosatellites currently lack an efficient propulsion system that would render them truly autonomous and thus able to carry out exploration or observation missions.

A motor that doesn't burn fuel

Instead of a combustible fuel, the new mini motor runs on an "ionic" liquid, in this case the chemical compound EMI-BF4, which is used as a solvent and an electrolyte. It is composed of electrically charged molecules (like ordinary table salt) called ions, except that this compound is liquid at room temperature. The ions are extracted from the liquid and then ejected by means of an electric field to generate thrust. This is the principle behind the ionic motor: fuel is not burned, it is expelled.

In the motor developed at EPFL the flow of ions is emitted from an array of tiny silicon nozzles – over 1,000 per square centimeter. The fuel is first guided by capillary action from a reservoir to the extremity of the micro-nozzles, where the ions are then extracted by an electrode held at 1,000 volts, accelerated, and finally emitted out the back of the satellite. The polarity of the electric field is reversed every second, so that all the ions – positive and negative – are ejected.

SystematIC Design, a MicroThrust project partner, designed the motor's electrical system. The ion ejection system requires a high electrical voltage, but the available energy aboard a 1-liter nanosatellite is limited to a few small solar cells – in practice, about four watts of power. The Dutch company was able to develop a system that overcame this difficulty.

After six months of acceleration, the microsatellite's speed increases from 24,000 km/h, its launch speed, to 42,000 km/h. The acceleration is only about a tenth of a millimeter per square second, which translates into 0-100 km/h in 77 hours. But in space, where there is no friction to impede motion, gentle but steady acceleration is the way to go.

"We calculated that in order to reach lunar orbit, a 1-kg nanosatellite with our motor would travel for about six months and consume 100 milliliters of fuel," explains Muriel Richard, a scientist in EPFL's Swiss Space Center.

The ionic motor will power CleanSpace One – a nanosatellite whose mission is to tidy up space by grabbing space debris and pulling it into the Earth's atmosphere to be safely incinerated. According to the Swiss Space Center, CleanSpace One will take two to three months and more than 1,000 terrestrial revolutions to reach one of its targets, the decommissioned Swisscube cubesat or Tlsat-1 cubesat. And the scientists have just over a year to finalize their system.

"Our prototype still has a few flow problems at the nozzle extremities, which could cause short-circuits," explains Shea. The prototype was developed in the context of a European project coordinated by EPFL and involved Queen Mary and Westfield College in the UK, the Dutch companies TNO and SystematIC Design B.V., and Nanospace AB in Sweden.

European Consortium for MEMS-Based Micropropulsion
Posted by Joel Raupe at 10:00 AM