LROC: The Rays of Messier A 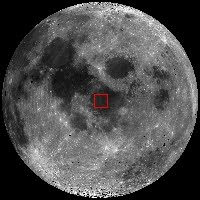 
If you have ever studied the Moon through a backyard telescope, you may have noticed the Messier impact feature in Mare Fecunditatis (Sea of Fertility) beginning around day 5 of the lunar cycle. The distinctive appearance of the ray structure is particularly eye-catching. The high-reflectance of the main ray pair contrasts nicely with the lower reflectance background of Mare Fecunditatis. What would these rays look like close up? The LROC Narrow Angle Camera allows us to "zoom in" and find out as the subject of today's Featured Image.

When scanning the full NAC frame (see link again at the bottom of this post), we can readily detect the location of the prominent ray pair. Not surprisingly, we see many small, relatively recent craters when examining the scene more closely. At first glance it may seem that the bright rays are due entirely to these small craters, many of which excavated immature mare material (high-reflectance) from beneath the space-weathered surface layer of regolith.


It would be tempting, then, to conclude that these small craters are all associated with the Messier A impact event. However, this determination is not straightforward. While some of these craters may be the result of Messier ejecta, there are also a great many similarly small, recent craters which clearly lie beyond the rays across the mare plains. It is possible that our eyes are deceived by the high-reflectance materials emplaced during the Messier impact event; note how the background reflectance between craters within the rays appears brighter than the reflectance outside of the rays.


Because of the prevalence of random small impacts across the mare, it is difficult to determine which craters in this image are primary impacts and which are true secondaries associated with the Messier A impact. The impacting body that created Messier A excavated rock from the impact site (the vast majority of which was target rock, not the impacting meteoroid). The larger fragments may have been capable of creating recognizable craters. Distinguishing secondary from primary impacts can be a serious challenge for researchers who count craters to determine surface ages.


Take a close look at the full NAC frame HERE to see more clearly where the ray begins and ends on this mare surface. You can find the Messier area in a small telescope by looking in Mare Fecunditatis beginning around day 5 of the waxing crescent Moon with each new lunar cycle. The walls of Messier A crater, with further discussion of the Messier crater complex, are showcased in Layering in Messier A. Other posts showing examples of secondary craters can be found in Regolith on Basalt, and Chain of Secondaries on Mare Orientale.


Messier and Messier A  inspire a variety of theories about their origin, each suggesting an oblique impact, but like John Moore, we don't mean to suggest the single theory mentioned further above (that a group of moderately separated asteroids or comets past their Roche threshold, still sharing the same orbital plain, rendezvoused violently with Mare Fecunditatis in a cluster of three impacts) be thought of as definitive.

We added this video because it's, well... awesome!
Posted by Joel Raupe at 5:01 AM

There are, of course, several scenarios for creation of the Messier(s) and their rays - here's a YouTube vid (http://www.youtube.com/watch?v=nmmDLuAWbQI&feature=channel)
showing just two (mind, not to be taken as definitive).

Note, it was made, simply, to serve as an introduction to the Messiers' and their possible formation.