A team led by Christian Hurt and William Featherstone of Curtin University in Perth, Western Australia, have produced a new Lunar Gravity Model (LGM2011) that is the highest resolution to date.  The new maps are based on methods successfully tested on Earth and proposed for the other rocky planets.

Using topography data collected from the Lunar Reconnaissance Orbiter (LRO) during its first two years in low lunar orbit, LGM2011 maps the finer details of the Moon’s uneven gravity well with unparalleled granularity. The improvements are a leap beyond recent, very detailed lunar gravity models released in 2005, following Japan’s Kaguya mission in 2009, and preliminary models from earlier in the LRO mission.


The topography used by Hurt and Featherstone for this latest gravity map is based on laser altimetry collected by the LOLA instrument between 2009 and 2011.

Laser altimetry measures the time it takes for a pulse to be reflected from the surface to be returned to the instrument in orbit. Because many of the fundamentals of spacecraft position are cross-referenced to a high precision, even very slight deviations from prediction can be tallied into finer measurements of lunar gravity.

According to Hurt, the new gravity maps show earlier surveys “neglected 50 per cent of the lunar gravity signal.”

“Our new lunar gravity map now shows, for the first time, how the pull of gravity changes from location to location,” Hurt said. "This reveals features of the lunar gravity field, including pockmark signatures, showing gravity accelerations are higher at the bottom of impact craters than the elevated crater rim, and revealing the strength and variation of gravity acceleration over the entire surface of the Moon."

The findings have been published in Earth and Planetary Science Letters.

LRO, launched together with LCROSS, June 9, 2009 has, to date, orbited the Moon 12,820 times. The LOLA instrument continues to record hundreds of millions of laser reflections, steadily building a finer and finer 3D lunar elevation model. 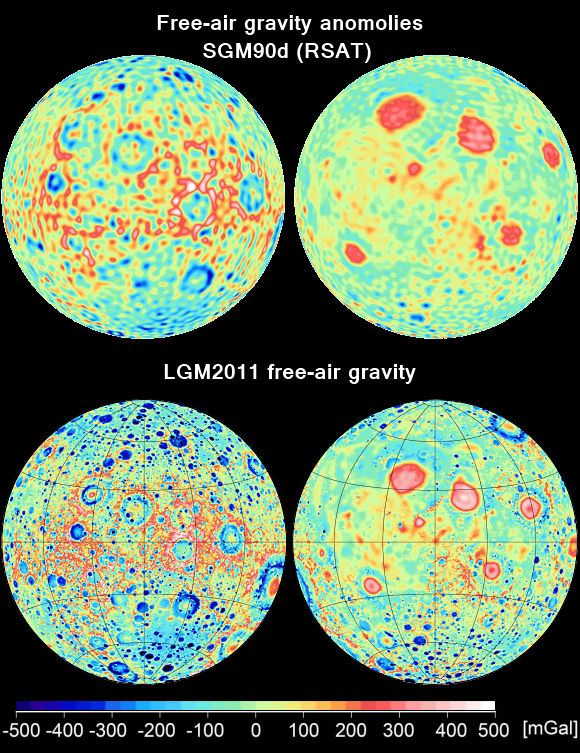 Could you clarify what you mean when you say that the details anticipate GRAIL results?

My wish would have been to have written more on back ground, but the theory goes something like this: The gravity mapping method employed by the Japanese and much of their orbital photography was unsurpassed until LRO. The LOLA instrument on LRO is rolling up a definitive topography over time, it's primary mission. Meanwhile, LROC Wide Angle Camera analysis has created an unprecedented topography, secondary to it's primary mission. LOLA data contributes to the most detailed gravity model for the Moon, secondary to its mission.

The short answer, LGM2011 is comprehensive in a way we should eventually expect from the GRAIL mission.

If LRO lasts through it's extended mission, it's possible LROC's elevation model employing Narrow Angle Cameras may be superior to LOLA's, though certainly not as comprehensive.

It's all surprising and delightful serendipity, perhaps even genius on the part of Hurt and Featherstone.

Let me know if that even comes close to answering your question, as I'm tapping this out on the run.

Matches the magnetic map of the moon quite well. Coincidence?
http://core2.gsfc.nasa.gov/research/purucker/moon_2010/index.html