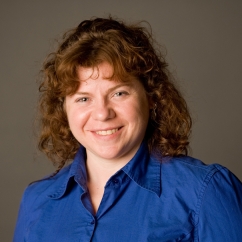 Dr. Barbara Cohen is a planetary scientist as NASA's Marshall Space Flight Center (MSFC) in Huntsville, AL. Barb has a B.S. in Geology from the State University of New York at Stony Brook and a Ph.D. in Planetary Sciences from the University of Arizona’s Lunar and Planetary Laboratory (LPL).

She is an expert in the geochronology and geochemistry of meteorites and serves as the project scientist for the US nodes of the International Lunar Network.

Barb has been to Antarctica twice as part of the Antarctic Search for Meteorites (ANSMET) program, driven the Mars Exploration Rovers around Mars, and even has an asteroid named after her (6816 Barbcohen). Barb is currently in the process of building a new flight instrument and a new noble-gas laboratory at MSFC.

As a current grad student at LPL, I was eager to interview Barb for the 51 Women in Planetary Science series.


Read the interview HERE.
Posted by Joel Raupe at 6:49 PM