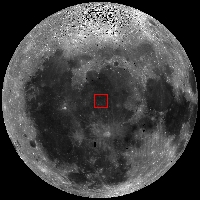 Today's Featured Image shows the boundary of a flow front in Mare Imbrium. Unlike other flows LROC has observed (granular, impact melt), these are lava flows! The flows are about 35 m thick, making them hard to observe unless the Sun is low and casting long shadows.

Apollo 15 imaged the flows early in the lunar morning, when the Sun was low on the horizon to help the low relief flows cast larger shadows!

Combining the observed geometric properties of these flows with viscosities calculated from the Apollo samples allow scientists to constrain how lava behaves on the Moon.


The Imbrium flows are fairly thick, and the WAC context shows them extending for at least 120 km, but the flows continue for several hundred kilometers. Should we expect this? Because the Moon's gravity is weaker than the Earth's, we can expect lunar lava flows to be ~1.7 times as thick as a terrestrial flow of similar length!

Flows of similar length on Earth have only been observed in flood basalts, which are large volumes of lava that were erupted quickly.

This correlation indicates that the lunar lava flows must have erupted quickly as well. Even so, these flows are some of the few examples still visible on the Moon's surface, and it is unclear how their thickness and extent relate to the majority of volcanism that filled in the large basins resulting in the maria.