The percentage of Cosmic Rays repelled by the Interplanetary (Solar) Magnetic Field, as recorded continuously over fifty years at the Moscow Neutron Monitor. [Monthly resolution corrected for changes in atmospheric pressure.] Detail of 2009, upper right, is shown in a similarly generated plot at the end of this post.
Joel Raupe
Lunar Pioneer Research Group

Without the Sun's magnetic field, it is believed, in-falling of "Galactic" Cosmic Rays (GCRs) at Earth arriving from every direction from outside the solar system is more or less constant.

If true, the evidence may be uncovered eventually by the twin U.S. probes Voyager-1 and Voyager-2 expected to reach interstellar space and beyond the influence of the Sun's interplanetary magnetic field (IMF) in five to eight years.

At its most active, at solar maximum, cosmic rays of a very wide variety, in mass and energy, are deflected from the inner solar system by the Sun when passing perpendicularly to the lines of force of its magnetic field. At these times, at the peak of the Sun's Sunspot Cycle, more than half of these highly ionizing and often very heavy atomic nuclei are kept from reaching the inner Solar System.

Put another way, at solar minimum a background Cosmic Ray flux impending on the inner solar system increases by more than 100 percent.
At the moment the Sun's remains in an unusual and lengthy quiet spell surpassed in the record book of the past hundred years only by the solar minima of 1913.

Since 1958, originally set up by the Soviet Union in celebration of the International Geophysical Year, the Moscow Neutron Monitor has continuously measured variations from an average background neutron flux as a method to gauge the strength of the Sun's interplanetary magnetic field. A haze of neutrons not otherwise associated with other celestial objects (like the Galactic Disk) is one remnant of those cosmic rays that manage to reach Earth's atmosphere, where they meet their doom, becoming short-lived aerosols or added electrical charge in the lower atmosphere. There is evidence and theory of more profound effects, as well.

The chart above begins a minute before midnight December 31, 1958 and runs through August 31, 2009, or 50.67 years (18,506 days). The website of the MNM invites users to similarly plot this percentage of variation over any period or resolution within their 51 year dataset.

The chart demonstrates an inverse relationship with the Sunspot Cycle, going up when the Sun is quiet, as it is today, and down when the Sun is magnetically active at solar maximum. It is not a measure irradiance (which seems to varie no more than a tenth of a percent during the Solar Cycle.)

Sunspots and the Solar Cycle are outward manifestations of a torturous process underway as the Sun is forced to change the polarity of it's magnetic field by an uneven rotation, and repelling of highly ionizing GCRs depends upon that fields strength, extent and continuity.

Fortunately, there are more direct detectors of Cosmic Rays besides Earth-bound neutron detectors that can only indicate GCR flux by inference. Voyager 1 and Voyager 2 are "just years away," we believe, from directly measuring these curious particles and their rates of incidence beyond the noisy Sun. Both imaging systems were shut down years ago but on-board experiments are collecting data, among these are Cosmic Ray Subsystems. Every six hours the aging probes, each powered by three radioisotope thermal generators, record the rate of ionizing atomic nuclei that populate two classes: those with energies greater than 500 keV and those with energies greater than 70 MeV. As of May 2009 Voyager-1 was 16.4 billion km (110 AU) from the Sun as Voyager-2 reached 13.3 billion km (89 AU). Voyager-1 crossed the termination shock, the beginning of the end of the solar wind and the IMF in 2004, at ~ 94 AU, and Voyager-2 crossed this area in 2007 at ~84 AU (confirming theories of the "squashed" shape of the heliosphere. Both are expected to reach interstellar space in 5 to 8 years. Strangely (or not) this plot of Voyager-1 data of encounters with nucleon with energies >500 keV is considered "a good indicator of GCR activity" by the present-day Voyager team. A less rapid change occurred near the time the Moscow Neutron Monitor data inferred an increase in GCRs in the inner solar system. In the outer solar system, Voyager-1 data seem s to show a recent decline, perhaps showing the effect of a fluttering solar wind at its extremes. Similar plots made over the same period showing one year of nucleon at higher energies (>70 MeV /nuc ion) show a slow but steady increase. Only time and patience, and the continued good health of the thirty-year-old Voyagers may tell if these data show a steady but declining influence from the Sun with increasing distance or a true measurable variation in Cosmic Ray flux outside the interplanetary magnetic field.


At the present time the Sun's magnetic field is as weak as has ever been accurately recorded, having recently surpassed the length and magnitude of the former record-holding weak moment in the Sun's IMF back in 1964.

Though the Sun's present unusually long solar minimum has been well-noted, the Home Star had been interpreted as showing signs and sputters heralding, finally, a poorly-predicted beginning of Solar Cycle 24; increased activity ahead of the next solar maximum finally underway that revised predictions now show occurring in 2013.

If the Moscow chart at the beginning of this thread and measurements of the IMF are bona fide indication of the Sun's changing mood, however, it has never been recorded as more gloomy. The IMF met and then surpassed the weak plateau in solar activity from 1964 only recently, in the past few months, after the nadir out of this present solar minimum was thought to have occurred.

Perhaps it is all normal, or at least not atypical. Closer study is needed to show how closely the percentage of neutron flux variation match data from other indicators of solar activity (and inactivity).

As seen on the graph at the top, (but easier at the MNM website) 1959 began with neutron flux repelled by the IMF by less than 12 percent, corresponding to an active Sun slowly quieting after the strong solar maximum in 1954. The repelling of cosmic rays then appears to fall off data collection continued through a deep solar minimum between 1964-65. The highest horizontal dotted line on the graph at the top of this page represents a mean, or "Zero Percent" variation in the background of neutrons detected.

After reaching that earlier recorded low in GCR deflection recorded in 1964, the Sun rapidly fires up for a peak just in time for the Apollo missions, and man's first voyages outside Earth's own magnetic field. Solar Particle Events (SPEs), Coronal Mass Ejections and such, occur at any time in the a Solar Cycle, but are admittedly more common and energetic when Sunspot numbers are high, and the Solar Cycle peak in 1968 did, in fact, worry Apollo planners.

Additional research done by NASA and the Department of Energy, in Space and on Earth in the years since has changed thinking about the real dangers of ionizing radiation for space travelers. An active Sun may make the situation less dangerous, as it turns out.

An active Sunspot maximum does not pose the greatest hazard to astronauts in Deep Space. It would be confirmed that the aluminum alloy hull of the Apollo command module and that of the Space Shuttle actually offered good protection from most effects of solar activity. And the Sun's strong interplanetary magnetic field repells 50 to 60 percent of GCRs.

Because Cosmic Rays are dangerous and can't yet be practically shielded against. A very high energy ionizing iron nucleon, for example, is not stopped by those aluminum hulls. Instead these heavy particles simply shatter and become instead miniature showers of secondary and tertiary ionizing radiation that quickly spreads into a cone the size of a human head, or torso.

Rather than being unnecessarily worried about the danger posed by an active Sun, NASA's researchers are now concerned more by energetic, ionizing cosmic rays. An active Sun may be a Deep Space astronaut's best friend, warding off microscopic energetic atomic nuclei that pack a wallop without being immediately felt. 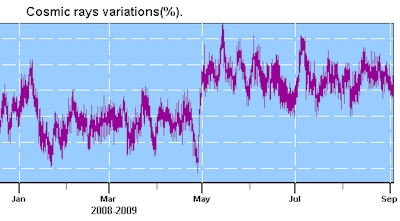 For more than a year, while closely monitoring other indicators of solar activity, a slow negative trend in neutron flux seemed to indicate the present long solar minimum was at last coming to an end. But in April the Interplanetary Magnetic Field noticeably retreated over mere hours. The neutron flux variation has since lingered in unfamiliar territory, actually 2 to 6 percent more than average, perhaps corresponding to a greater cosmic ray incidence and breaking and exceeding the 1964 record. [Resolution plotted hourly; corrected for atmospheric pressure.]
Thank you to SpaceWeather.com,
Moscow Neutron Monitor, and NASA.
(NOTE: This is posting number 1,500 at the Lunar Pioneer/Lunar Networks Service Blog)
Posted by Joel Raupe at 5:05 AM