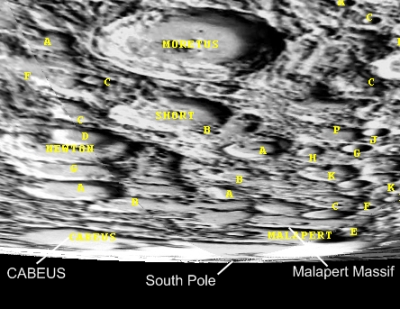 Cabeus proper, the new target for the LCROSS impact, as favorably inclined and lit by the sun on Oct. 9 at 10:30 ut. The sunset terminator is to the right (see context image below), showing the preferred target for the former traveling companion to LRO will be nearly as close as it can be to experiencing high noon. [Virtual Moon Atlas 4b]
When the LCROSS targeting team made its recommendation ranking Cabeus A as its most favored place to slam the two-ton Centaur upper stage on October 9, it left itself open to change that target as late as ten days prior to impact. And that's just what they did... sort of.

Rather than guiding LCROSS, with it's shepherding and sensing satellite following only 400 kilometers behind, into the Cabeus heights and Cabeus A, revised observations indicate far larger Cabeus proper may have the strongest hydrogen signature of any location in the lunar south. According to NASA, datasets from Lunar Prospector's neutron spectrometer (1998), confirmed by the more sophisticated LEND neutron spectrometer on-board the Lunar Reconnaissance Orbiter (LRO) played a role in the decision.

According to the press release from NASA Ames, "The decision was based on continued evaluation of all available data and consultation/input from members of the LCROSS Science Team and the scientific community, including impact experts, ground and space based observers, and observations from Lunar Reconnaissance Orbiter (LRO), Lunar Prospector (LP), Chandrayaan-1 and JAXA's Kaguya spacecraft. This decision was prompted by the current best understanding of hydrogen concentrations in the Cabeus region, including cross-correlation between the latest LRO results and LP data sets."

"The general consensus of lunar experts led by the LCROSS science team is that Cabeus shows, with the greatest level of certainty, the highest hydrogen concentrations at the south pole. Further consideration of the most current terrain models provided by JAXA's Kaguya spacecraft and the LRO Lunar Orbiter Laser Altimeter (LOLA) was important in the decision process."

"The models show a small valley in an otherwise tall Cabeus perimeter ridge, which will allow for sunlight to illuminate the ejecta cloud on Oct. 9, and much sooner than previously estimated for Cabeus. While the ejecta does have to fly to higher elevations to be observed by Earth assets, a shadow cast by a large hill along the Cabeus ridge, provides an excellent, high-contrast, back drop for ejecta and vapor measurements."
Read an excellent summary at Universe Today, HERE. 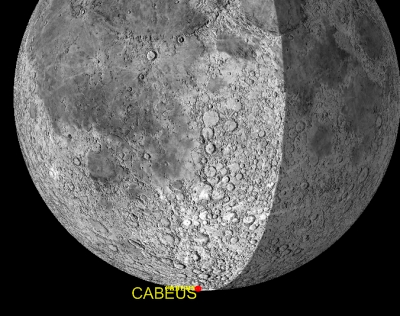 The Moon, complimented with proper libration and solar phase angle, at 10:30 ut, 9 October. Best estimates show the Moon will be visible from west of the Mississippi to Asia, especially over the telescopes of Mauna Kea on Hawai'i.
Posted by Joel Raupe at 11:53 PM