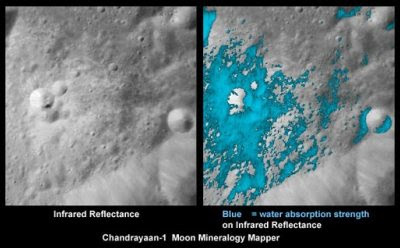 Minerally-bound water in the ejecta blanket of a fresh crater (less than 100 million years old) as detected in 1,000 gigabytes of data collected by NASA's 3M spectrograph as it flew aboard the Indian Space Research Organisation (ISRO) lunar orbiter Chandrayaan-1. A simular image was built showing hydroxels that was not spread from the point of impact in all direction, as is the water-bearing materials, showing that the hydroxel-bearing minerals were likely to have been excavated from some depth.

"The moon continues to surprise us," said Dr. Carle Peiters, principle investigator for the American-made 3M experiment on-board India's Chandrayaan lunar orbier. "Widespread water has been detected on the surface of the Moon."

Instruments aboard three spacecraft reveal water molecules in amounts greater than predicted.
Hydroxyl (OH) - molecules consisting of one oxygen and one hydrogen atom was also was found in the lunar soil, in greater abundance. The findings were published in Thursday's edition of the journal Science.

Data from the Visual and Infrared Mapping Spectrometer (VIMS) on Cassini spacecraft and the High-Resolution Infrared Imaging Spectrometer on NASA's EPOXI (AKA "Deep Impact") contributed to confirmation of the findings.

"Water ice on the moon has been something of a holy grail for lunar scientists for a very long time," said Jim Green, director of the Planetary Science Division at NASA Headquarters in Washington.

From lunar orbit M3's state-of-the-art spectrometer measured light reflecting off the moon's surface at IR wavelengths and revealed "a new level of detail in surface composition," according to NASA.

"When the M3 science team analyzed data from the instrument, they found the wavelengths of light being absorbed were consistent with the absorption patterns for water molecules and hydroxyl.

"For silicate bodies, such features are typically attributed to water and hydroxyl-bearing materials," said Carle Pieters, M3's principal investigator from Brown University. "When we say 'water on the moon,' we mean molecules of water and hydroxyl that interact with molecules of rock and dust specifically in the top couple of millimeters of the moon's surface. "

Whether this water is a result of solar wind interaction, out-gassing, cometary impacts, a combination of all of these and other lunar exospheric dynamics is not yet understood.

Roger Clark of the USGS, and a member also of the Cassini and 3M teams said the finding was not detected previously because removal of spurious detections of water is very much a part of the calibration process. Cassini was switched on during its fly-by of the Moon in November 1999 as calibration began and was immediately switched off until the vehicle approached Saturn. in 2004. Detection of a lunar water signature in the Cassini data was not apparent until 2008, after four years in Saturnian orbit.

"The data from Cassini's VIMS instrument and M3 closely agree," said Clark. "We see both water and hydroxyl." While the abundances and ratios are not precisely known, as much as 1,000 parts per million could be in the lunar soil. "To put that into perspective, if you harvested one ton of the top layer of the moon's surface, you could get as much as 32 ounces of water."

For additional confirmation, scientists turned to the "EPOXI" mission (AKA 'Deep Impact") and calibration data collected while it flew as close as 8 million kms from the moon in 2008 and June 2009 (on its way to a November 2010 encounter with comet Hartley 2).

That spacecraft confirmed the VIMS and M3 findings and expanded on them. "With our extended spectral range and views over the north pole, we were able to explore the distribution of both water and hydroxyl as a function of temperature, latitude, composition, and time of day," said Jessica Sunshine of the University of Maryland.

Sunshine is EPOXI's deputy principal investigator and also a scientist on the M3 team. "Our analysis unequivocally confirms the presence of these molecules on the moon's surface and reveals that the entire surface appears to be hydrated during at least some portion of the lunar day."

Because the EPOXI data in June 2008 were collected on two occassions, several days apart, Sunshine said, it was possible to see a stronger water signature at sunrise that dissipated at Noon and reaccumulated in the afternoon, before local sunset.

Meanwhile, ahead of the LCROSS impact on October 9, NASA is excited by the possibility of understanding lunar hydrology as a function of depth, as the impactor excavates as much as a meter deep into Cabeus A.
Posted by Joel Raupe at 1:00 PM