Shadow on the Moon 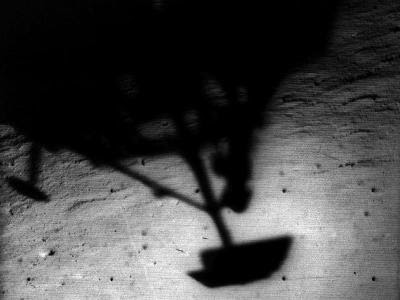 NASA's Picture of the Day, Thursday, Sept. 24, 2009. Surveyor 1, the first American soft landing on the Moon, after a near-perfect direct-to-landing 44 hour-long trans lunar coast and its landing on the near side, leading edge of the Moon in it's orbit; (316.8° east, 2.5° south) in Oceanus Procellarum, coming to rest 65 km northeast of Flamsteed within the Flamsteed P 'ghost crater' ring. This image of Surveyor 1's shadow show it's mast and solar panels cast against the lunar surface in the late lunar afternoon. Surveyor 1 was launched on May 30, 1966, and landed on June 2, 1966. The flight proved the Hughes Aircraft design and landing technique and returned more than 11,000 slow-scan color television images. The first of the Surveyors recorded information on the bearing strength of the lunar surface, its radar reflectivity and temperatures. Still sitting precisely where it came to rest 43 years ago, the 4.3 meter-wide, 3 meter-high Surveyor weighed 330 kilograms, with an additional 537 kg of propellant at launch. Arriving at a relative 2,600 meters per second speed, one retrorocket fired until reaching 97 kilometers over the surface, followed by the firing of three vernier (variable throttle) descent engines that cut-off when Surveyor's three legs reached 5 meters altitude. Surviving more than one two-week long lunar night, Surveyor 1 stayed in contact with JPL until the following October and was last, briefly reactivated in January 1967. [NASA/JPL]
Posted by Joel Raupe at 2:07 AM