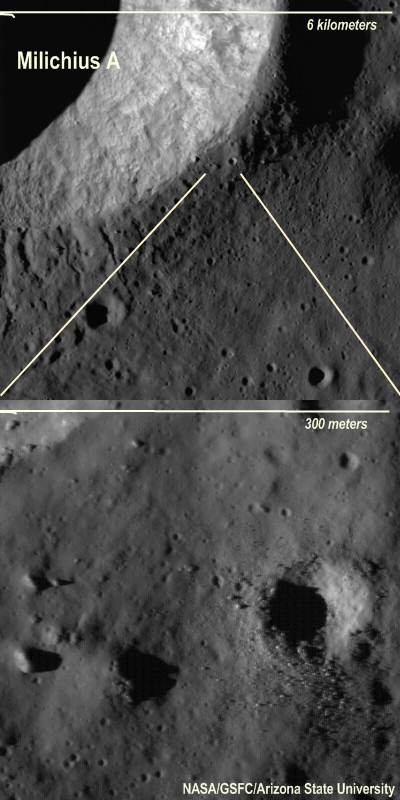 The inner rim of Milichius A crater in Mare Insularum from the Narrow Angle Camera aboard the Lunar Reconnaissance Orbiter. Top Image does not do this Copernican Age (> 100 million years) crater justice, and the inset is taken from the full-sized representation showing the bolders thrust upward with the relatively recent impact. [NASA/GSFC/Arizona State University].
Samuel Lawrence
LROC News System

Milichius A is a Copernican-aged crater found in the middle of Mare Insularum (upper left). There are many different sizes of impact craters in this view, from 9 km in diameter (Milichius A) all the way down to craters that are just a few meters across. The "cracked" appearance of the rim exterior is a result of impact melt flowing after emplacement, and is fairly common in other similarly-sized, relatively young Copernican-aged craters. You can also see that while there are numerous smaller craters on the surrounding ejecta blanket, the interior of the crater seemingly has far fewer craters than the exterior. Does this mean that there have been no impacts on the inner wall of Milichius A? Probably not - there have almost certainly been many small impacts on the steep surface. Instead, the streaks that you see on the crater walls are places where materials have simply slumped into the crater, covering and obscuring the smaller craters as it slides down the walls of the crater, although some of the darker, low-albedo streaks may actually be impact melt flows.
Uncalibrated LROC NAC data; north is up; image width is 6 km. Browse the whole NAC Image. (From NAC Archive - Featured Image Sept. 20, 2009) 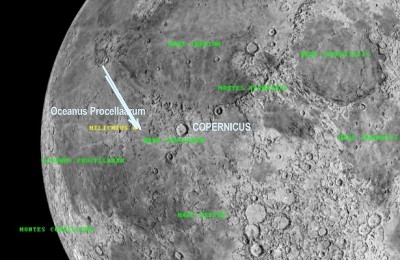