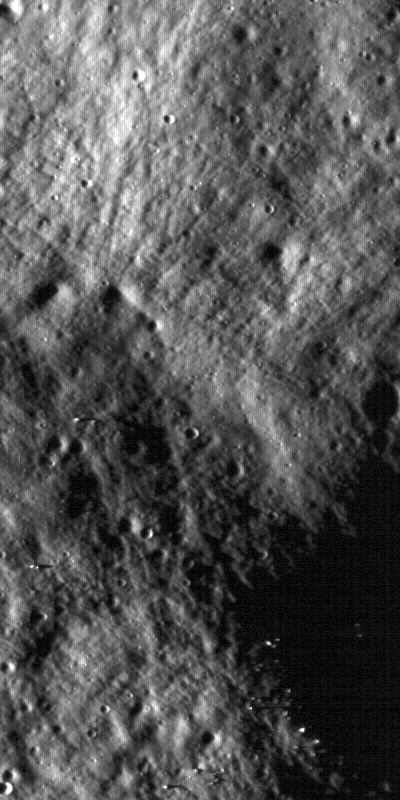 Rima Ariadaeus (Inset of Thumbnail for Full Resolution) - Sept. 28, 2009: The linear rille on the nearside of the Moon, nestled between Mare Tranquillitatis and Mare Vaporum (Map Below). Most linear rilles are believed to represent tectonic faulting, and are often used to determine stratigraphic relationships on the lunar surface. [NASA/GSFC/Arizona State University]. 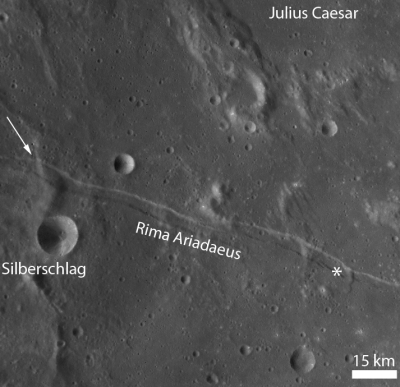 Rima Ariadaeus: One of several linear rille systems nestled in the highlands between Mare Vaporum and Mare Tranquillitatis. Some rilles, such as Vallis Schroteri, were formed by volcanic eruptions. Other rilles, such as Rima Ariadaeus, are believed to be faults that formed as a result of tectonic activity. Some scientists believe that the linear rilles might have formed after large impact events, while others believe that the rilles were formed as a surface manifestation of deep-seated dike systems when the Moon was still volcanically active.

LROC NAC images are providing scientists with data to examine the relationships of the surface features until future human lunar explorers can complete field research. However, experts agree that Rima Ariadaeus, which extends for approximately 300 km, is a fault system exhibiting a well-developed graben typical of normal fault systems on Earth. A large portion of Rima Ariadaeus is visible in this subset of an uncalibrated

Rima Ariadaeus is 5 km wide and disrupts the pre-existing geologic features, which can be observed in the WAC frame. The stratigraphic relationships between the rille and other surface features can help determine whether the rille is older or younger than these features. The rille cross-cuts a ridge in the middle-left of the WAC frame (near the arrow in the WAC image); this relationship suggests that the rille is younger than the ridge because the rille changed the shape of the ridge.

However, in the LROC NAC image there are small craters present on the rille floor, which suggests that the rille is older than these superposing craters. These types of observations are used to examine stratigraphic relationships and the relative ages of landforms in this region so that scientists can reconstruct the Moon's geologic history.

Can you find other stratigraphic relations in the WAC frame? (LROC Home) 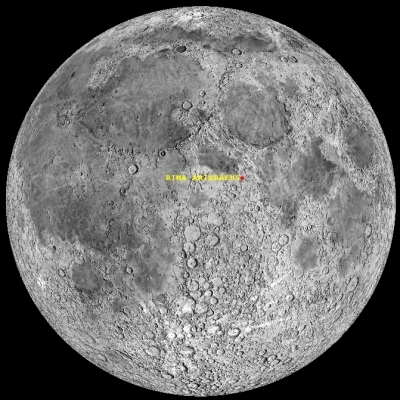 Location of Rima Ariadaeus, between Mare Tranquillitatis and Mare Vaporum (13.0° East, 7.0° North - Virtual Moon Atlas 4b); named for a 4th Century BC Macedonian ruler, the linear rille is roughly 133 by 4 km, rated "an exceptional formation" when viewed telescopically 6 days before or 5 days after a Full Moon.

VMA describes Rima Ariadaeus as a "large rectilinear" feature, oriented east by southeast to west by northwest, "ramifies to the west, with a branch to Rima Hyginus, splits to the east near Ariadaeus (Crater); fulfilled by mountainous cape to the North of Silberschlag, floor filled by mare material in places."
Posted by Joel Raupe at 9:23 PM