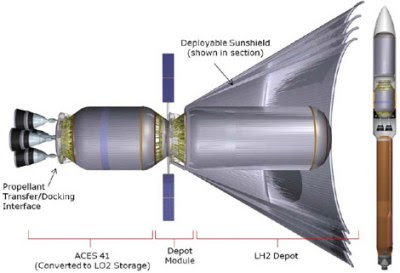 Notional orbital propellant depots - As millions who have flown to the Moon (without leaving their PC) using the popular DeltaGliderIV add-on to Martin Schweiger's acclaimed and free Orbital Simulator program know, it is "possible" to get there without using a heavy-lift booster. It is "just" possible, that is, though it does take practice and some knowledge of Von Braun's free-return trajectory.

Pulling this stunt off, in real time, for me at least, also requires an off-plain orbit change and subsequent rendezvous and docking with the magically restored Soviet Mir space station, conveniently parked in low-earth orbit, as near as possible to the orbital plain of the Moon.
With a replenished "fuel" tank, using the DeltaGliderIV, a pilot can then line up for trans-lunar injection, just like the Apollo-Saturn IVB configurations of yore, and arrive with a reasonable amount of crew and cargo for the low-energy (~800 m/s) orbital insertion burn behind the Moon, in 90 to 120 hours, again, just like Apollo. It is also possible to land at a precise location on the Moon, breaking orbit for a terminal insertion burn, make a pin-point landing and then return to lunar orbit and afterward accelerate for a two to three day return to Earth, just like Apollo.

Unlike Apollo, I have not succeeded in a direct re-entry at 25,000 mph. Either the vehicle or the pilot can't handle such a hairy maneuver, yet. Instead, I have successfully used what remained of the "vehicle's" fuel to reduce velocity while speeding up through what would otherwise be a hopeless Earth fly-by, from over 11,000 meters per second to the 7700 meters-plus per second velocity of low-earth orbit. I have then subsequently performed the tricky Shuttle-like "standard" re-entry maneuver and dead-weight runway landing.

If Orbital Simulator 2006 can be thought of as Martin Schweiger's "chalk board," a vehicle small enough to fit inside the cargo bay of the Space Shuttle can travel to the Moon, land and return to Earth. Without on-orbit fuel transfer, however, involving a rendezvous with a pre-fueled payload assist (PAM) rocket or a direct fuel transfer, the scenario described definitely requires an expensive, heavy-lift expendable booster.

Admittedly, on-orbit refueling after using more than half of a small vehicle's fuel capacity (to say the least) is science fiction, but no more than orbital rendezvous was equally problematic before the Gemini program (1965-1966). Unlike orbital rendezvous, which the United States, Russia and more recently the ESA have made appear easy, on-orbit refueling would not be a magic act. It requires more than a little appreciation for the delicacies and sensitivities of temperatures and couplings.

Or does it? The Constellation program, in a very real way, already features on-orbit refueling, using the rendezvous and docking with pre-positioned unmanned vehicles launched using unmanned heavy-lift boosters, like the Ariane V, or the Ares V now under development.

Long term, for manned space travel beyond low-Earth orbit to be less than prohibitively expensive, according the Second Augustine commission, may require a step beyond the Apollo-Saturn and Shuttle surplus idea to new, "perhaps" cheaper technologies. These won't be free R&D spin-offs, but the result of a deliberate program, probably as expensive as Gemini, to take orbital rendezvous past a dangerous, though logical, technological hurdle.

From Popular Mechanics and Rand Simberg

"It has long been conventional wisdom, going all the way back to Apollo, that heavy lift was a prerequisite for human exploration beyond low Earth orbit, but this summer has seen several cracks start to appear in that consensus. First, partly as a result of white papers circulated among its members in the last few weeks, the Augustine panel itself has championed the concept of propellant depots. But defenders of the current approach have claimed that the ideas aren't fleshed out, and are too complex and expensive. This week, at the American Institute of Aeronautics and Astronautics annual meeting on space in Pasadena, Calif., several technical papers have more to say on the subject of getting back to the moon with existing launch systems.

"While Boeing and Lockheed Martin can smell the Ares blood in the water, they still both have lucrative contracts for the Constellation program (Orion for Lockheed Martin, and the Ares I upper stage for Boeing), and they can't afford to upset the apple cart unless they know that the program is definitely dead. Three years ago, Lockheed Martin got itself into hot water with the former administrator, Mike Griffin, at the AIAA meeting in San Jose, where they held a joint press conference with Bigelow Aerospace announcing a study to "human rate" the Atlas V to service Bigelow's planned facilities. Griffin reportedly called upper management there to complain about the potential threat these plans posed to maintaining political support for Ares."