Kaguya and the Lunar Magma Ocean 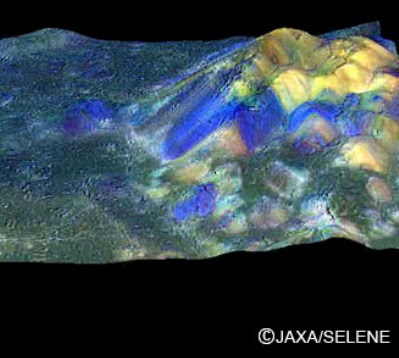 Color Me Anorthosite - Lunar Picture of the Day (LPOD), Sept. 13, 2009 (Chuck Wood) The Japanese lunar orbiter Kaguya is gone, but great science keeps coming from its data. These images show the global distribution of lunar craters whose central peaks are enriched in anorthosite. ... Central peaks are studied because they bring up material from 3-30 kilometers beneath the surface. The importance of anorthosite is that it is believed to have formed in the magma ocean at the tail end of the Moon's accretion. As a low density mineral it floated to the surface as a scum and presumably remains there, except where penetrated by later impacts or covered by mare lavas or megaregolith. ... The detailed image ... shows the central peak of the farside crater Jackson, revealing high resolution mapping on a 3-D perspective of the distribution of anorthosite in the peak. An intriguing observation - already known from terrestrial work - is that Aristarchus is anorthosite-rich, suggesting it is underying primordial magma ocean crust.

This has been offered as strong evidence against the existence of the putative Gargantuan Basin (that covers more than half the nearside, and may be centered northwest of Mare Tranquillitatis), because the anorthosite crust may have been largely removed by the giant basin's formation. Aristarchus is the only nearside crater within the (near side) maria fresh enough for anorthosite to be detected, which is not to me compelling evidence that the magma ocean crust is extant within most of the Gargantuan region. [Japanese language section of Kaguya Image Gallery, JAXA - Textural context highlights explanation by Wood from LPOD post, Sept. 13]
John Matson
Scientific American

The leading hypothesis for the moon's formation contends that a massive impact billions of years ago knocked a wealth of planetary material off of Earth, which coalesced into our lunar companion.

But that coalescence was not a serene process—the heat of formation left the nascent moon coated with an ocean of magma, researchers studying samples returned by Apollo 11 theorized in 1970. As that ocean cooled, its most buoyant components floated to the top, forming an outer shell over denser layers of rock.

Now, a geological survey of the moon conducted using data collected by the recently retired Kaguya spacecraft supports this magma-ocean hypothesis, finding that the upper layer of the moon's crust is indeed rich in low-density rock of exceptional purity. The results from the Japan Aerospace Exploration Agency's Kaguya, formerly known as the Selenological and Engineering Explorer (SELENE), are published in this week's Nature. (Scientific American is part of the Nature Publishing Group.)

The Kaguya orbiter looked for anorthosite, a type of rock enriched in the relatively low-density mineral plagioclase. The spacecraft's survey found that in fresh craters and basins across the lunar highlands, the terrain that constitutes the majority of the moon's crust, anorthosite was not only prevalent but was almost entirely pure—that is, the rock was nearly 100 percent plagioclase. The study's authors speculate that exceptionally pure anorthosite may make up a global layer of the moon's crust from roughly three kilometers to 30 kilometers below the surface.

The ubiquity of the buoyant crustal rock points to a formation process that worked the same way across the moon, such as a magma ocean. The Kaguya results show that anorthosite formation "is really a global process," says John Longhi, a petrologist at the Lamont-Doherty Earth Observatory of Columbia University and currently a visiting scholar at Duke University, who did not contribute to the study. "Forming it by any other means than a magma ocean seems very doubtful, even though I've proposed one of those models. This research seems to suggest that there's really no other way."

Read the full feature, HERE.
Posted by Joel Raupe at 3:35 AM