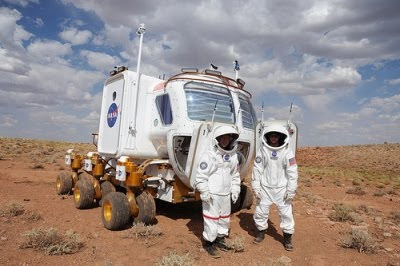 The Desert RATS -- or Research and Technology Studies -- in the Arizona desert at Black Point Lava Flow allow NASA to analyze and refine technologies and procedures in extreme environments on Earth.

"These tests provide us with crucial information about how our cutting edge vehicles perform in field situations approximating the moon," said Rob Ambrose, Human Robotic Systems project lead at NASA's Johnson Space Center in Houston. "We learn from them, then go back home to refine the technology and plan the next focus of our research."

The annual studies featured an intensive, simulated 14-day mission. Two crew members, an astronaut and a geologist, lived for more than 300 hours inside NASA's prototype Lunar Electric Rover. The explorers scouted the area for features of geological interest, then donned spacesuits and conducted simulated moonwalks to collect samples. The crew also docked to a simulated habitat, drove the rover across difficult terrain, performed a rescue mission and made a four-day traverse across the lava.

Throughout the test, the crew provided updates via Twitter and posted pictures and video online. To see the images and videos and read about the simulated mission, HERE.

Prior to the test, NASA's K10 scout robot identified areas of interest for the crew to explore. NASA's heavy-lift rover Tri-ATHLETE -- or All-Terrain Hex-Legged Extra-Terrestrial Explorer -- carried a habitat mockup to which the rover docked.

The Desert RATS tests have been held for more than a decade, as engineers from NASA centers work with representatives from industry and academia to determine what will be needed for human exploration of the moon and other destinations in the solar system. This year's work built on the investigations of previous years and increased the scope and length of the tests.

Eight NASA centers were involved in the project. Desert RATS participants from outside NASA include the Smithsonian Institution in Washington; the United States Geological Survey in Flagstaff, Ariz.; Arizona State University in Tempe; University of Texas at El Paso; University of Colorado at Denver; Brown University in Providence, R.I.; the Mars Institute at Moffett Field, Calif.; and the Challenger Center for Space Science Education in Alexandria, Va.