Boulders In the Sea of Serenity 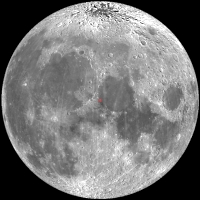 A wrinkle ridge in western Mare Serenitatis (23.448°N, 8.058°E) is one of many in the region that exhibits a high boulder density and high albedo (bright) summit areas. But it isn't the only place this relationship is seen! These bouldered ridges are also observed in Oceanus Procellarum, Mare Humorum, Mare Cognitum, and Mare Nubium, to name a few. Scientists are still uncertain as to why some ridges have these features and others don't, and why this isn't observed along the entire ridge. This ridge seems to be eroding along its slope, rather than the crest, suggesting that the material is coming from the ridge itself. In addition, a small impact crater (red arrow in below image) has excavated boulders and high albedo material, making it more likely that the source is from the ridge and not a product of distant cratering events.

There are two ways to describe high albedo on the Moon: either freshly exposed rock and soil, or material with different composition or properties. It is uncertain which description is best for the high albedo observed along these ridges or whether it is a combination of the two. If the boulders and high albedo material have happened because of tectonic activity, then that implies that activity along mare wrinkle ridges has occurred more recently than previously thought. These features need to be studied in more detail in order to fully understand what role they play in lunar history. This is just one of the many surprises that LROC has revealed!

To view the ridge in more detail, look at the top of the full LROC NAC frame, HERE.

UPDATE: A Closer Look. This area of the Serenitatis basin is particularly interesting, under the influence of the extrusive volcanism of Sulpicius Gallus and the unusual elevation slope lower in elevation approaching the southwest basin rim, has been the subject of several earlier posts. As it turns out, for example, we had already, long ago, downloaded the entire 5000 sample by 52224 line NAC image from the Commissioning phase of the LRO mission about three years ago.

In a quick study, again using the continuously improving LROC image search tools, we wanted to see if any higher-resolution LROC NAC observations had been captured since September 5, 2009. Among the overlapping or nearly overlapping LROC NAC Observations we found of this same wrinkle ridge system were at least two perhaps helpful in further illustrating the area of interest.