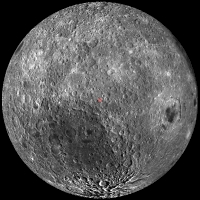 Impact melt forms during crater formation when part of the impact-generated shock wave energy released during the impact event is released as heat. As the shock wave passes through the target, the amount of melting is related to the shock pressures reached during impact (for more information, see Chapter 6 in Traces of Catastrophe, by Bevan French).

Often, impact melt appears visually smooth in LROC images, particularly at the WAC scale and in large craters like Tycho. However, Narrow Angle Camera (NAC) observations like today's Featured Image show that impact melt does not always have a flat "ponded" surface. In this case, the melt ponds inside an ~5 km diameter crater (17.121°S, 215.646°E) are far from smooth.

Sometimes impact melt appears visually smooth because there is enough melt that pools to cover up the fragmented floor of the crater or wall terrace. When there is less melt, the melt may pool in localized depressions to create smoothed surfaces as well as cover the surrounding fragmented, jumbled rocks pulverized during impact. Another possibility is that as the melt formed and began to cool on the crater floor, fragmented material fell from the crater walls and rim into the crater cavity to become mixed and entrained within the melt, helping to form a rugged melt-covered crater floor.

Examine the full LROC NAC image, HERE, to see if you can discern material that was entrained before the melt cooled and blocks that may have fallen to the crater floor at a later date!