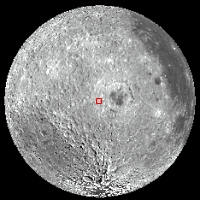 Today's Featured Image (Dec. 31, 2012) highlights an upper portion of the crater wall of an unnamed crater (10.7 km diameter), located in the southwest portion of the Orientale basin. The rim crest is at upper-left in this image. The biggest crater at the left side is actually on the rim crest.

The distinctive crack extending from the lower-left to upper-right cuts across a rough fractured slope. Most likely this surface corresponds to smoother terrain just outside the crater (upper left). Likely both surfaces formed as impact melt cooled. The portion on the steeper surface later fractured as gravity-driven slides slowly broke this crust.

Impact melts are recognized as common features on the Moon, the LROC NAC has imaged many spectacular occurrences (see links below). Impact melt deposits are of special interest to geologists as they hold a record of when an impact event occurred. A rocks radiometric clock starts ticking when it cools and hardens. If you can connect a particular impact melt rock to a crater, you can determine the exact time when the crater was formed.

Explore the sinuous cracks in the full NAC frame yourself, HERE.