Channels and fractures at Anaxagoras 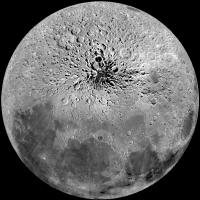 Stratigraphic relationships in impact melt deposits are not always easy to find, but careful observations of the LROC NAC images provide the perfect opportunity to search! Yesterday's Featured Image presented overlapping distal margins of melt and "bathtub rings" on the northern wall of Anaxagoras crater. Today's Featured Image highlights another stratigraphic relationship in the southwestern portion of the melt pool in Anaxagoras (73.271°N, 349.033°E). Along with the typical fractures near the melt boundary interpreted to be the result of cooling and contraction, there is an impact melt-covered mound (opening image, right) with boulders eroding out from the steepest slopes. At the bottom of the image, there are two parallel troughs that cut through pre-existing material. These troughs probably represent impact melt-carved channels, where melt flowed from higher elevation to lower elevation and carved out a pathway.

But which way did the melt flow? Looking carefully, there are faint linear depressions extending from the top of the image to the channels, suggesting that flow progressed from the bottom right of the image toward the top left. These linear channels are very shallow, barely visible compared to the visible fractures. The shallowness of these channels possibly result from later movement of melt. The fractures cross-cut the shallow channels, indicating that the channels are older than the fractures.

However, note the sharpness of the fractures. The fractures that curve toward the mound and closest to the deeply carved channel troughs have a smoothed appearance when compared to the fractures closer to the top center of the image. Thus, there are two families of fractures, suggesting that perhaps the channels flowed into this area on top of a lightly-crusted pond (reasoning for shallow channels remaining) that then continued to cool, forming the first set of fractures. As the melt cooled more, maybe the second set of fractures formed if the second set is related to cooling.

Perhaps the second set of fractures formed as an internal plumbing system failed, or maybe an injection of hotter melt into this area (beyond the opening image frame) occurred that inflated the crust of the cooling melt and shallowed both the channels and first set of fractures. Without additional detailed observations, including NAC-derived topography, the stratigraphic story of melt movement and cooling concludes with at least two (three?) endings. However, the presence of small pits in the youngest fractures may provide supporting evidence for the plumbing or inflation story, because pits and fractures in the pond interior (away from the melt boundaries) are probably related to a lava tube-like underground melt plumbing system, a hypothesis supported by many NAC images at many different locations on the Moon.

What do you think? After studying the full LROC NAC image, HERE, do you have supporting evidence for the conclusion to the stratigraphic story of melt in this portion of Anaxagoras?