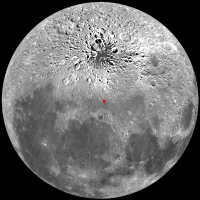 Why, compared to other wrinkle ridges in this region, is today's wrinkle ridge so small? Consider the location of the wrinkle ridge in the WAC context image (above). The wrinkle ridge formed within the basalts infilling an old crater and is less than 10 km from the mare-highland boundary. It is possible that the mare-fill is thinner in this area, which would affect the degree to which the basalt could fault. This hypothesis is supported by the presence of several nearby kipukas, which were not covered by the embaying lava and probably affected the contractional strain in this area.

Further support for this hypothesis comes from observations of small wrinkle ridges in some mare-flooded craters that have much less basalt volumes than the flooded nearside basins. However, scientists have not yet identified all the wrinkle ridges in the mare, so it may be that many small wrinkle ridges are widespread that simply were unresolvable in older lunar images! Such an occurrence would make sense, especially when considering the range in sizes of lunar lobate scarps discovered by LROC1!

Do you see any evidence of kipukas affecting wrinkle ridge formation in the full LROC NAC image, HERE?