Symmetric Ejecta in the Farside Highlands 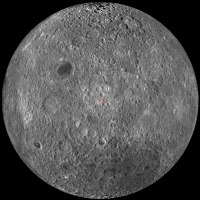 The 180 meter diameter impact crater observed in the opening image (8.874°N, 171.899°E) formed in the farside highlands. Its location away from compositional boundaries (like the mare-highland boundary) suggests that the high albedo ejecta blanket is due to freshly exposed material, indicating a young impact. How do we know that? Because material of the same composition that has been exposed to less space weathering (i.e., material that is younger) is brighter. Additionally, images acquired with the Sun nearly overhead emphasize albedo contrasts, bringing out details of ejecta distribution and rays. The directions in which ejecta spread out from a crater tells us about the angle the bolide (comet or asteroid) hit the surface. A symmetric ejecta blanket like this one typically indicates that the bolide impacted at an angle of 45° or greater (90° is vertical); an impact angle less than 45° produces asymmetric ejecta blankets. It is important to have high Sun angle images because without them, it is harder to determine the extent of the ejecta blanket and other young features.


The above image is of the same crater but with a different Sun angle - just look at the difference! Can you tell how big the ejecta blanket is or the distribution of ejecta with distance? In the low Sun angle image, could you tell that there were two craters next to each other, or which craters might be considered secondary craters?

Even at the resolution of the WAC mosaic, the crater is still visible due to its bright ejecta blanket!

To spot your own young craters, view the full LROC NAC, HERE.