Up and Down, Back and Forth 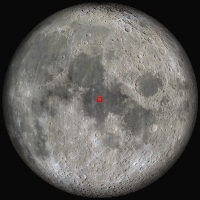 Today's Featured Image shows the amazing intersection of a northeast-trending wrinkle ridge and a northwest-trending graben, both found in Mare Tranquillitatis (intersection is located at 9.2°N, 27.66°E).

Structural stresses in the crust are not always simple! Another large scale example of this type of intersecting compression and extension environments exists in eastern Mare Tranquillitatis at Cauchy rupes and rimae.

The width of the ridge varies from about 700 m to more than 2500 m, it is about 120-150 m high adjacent to the graben. Large variation in the width of wrinkle ridges is common.  In this case, the thrust fault that formed the ridge is interpreted to dip to the southeast, based on the asymmetry of the topography (the northwest side of the ridge has a steep slope and the southeast side has a gentle slope).

The lunar surface exhibits a variety of tectonic features that are produced when the stresses in the crust exceed the strength of the rock and the rocks break.  Depending upon the magnitude of the stress, the strength of the rock, and the orientation of the stress different types of tectonic features are produced. The two most common on the Moon are graben and wrinkle ridges. Graben are narrow blocks of the crust that have been down-dropped between two normal faults. Wrinkle ridges are thrust faults in which a part of the shallow crust has been thrust over the adjacent area; the upper part of the crust has been folded like an anticline into the wrinkle.

In this particular location the type of stress reversed over time. First there was an northeast-southwest directed extension that produced the graben, which is about 500-700 m wide and extends for more than 50 km to the northwest. Later, the crust was compressed along a northwest-southeast direction that resulted in the wrinkle ridge.  This ridge is part of a system of wrinkle ridges that extend southwest from a ridge of exposed older highlands material ~30 km to the northeast.

The annotated image below shows the stress directions associated with the graben and the wrinkle ridge.  Red arrows denote the tensional stresses that produced the graben; blue arrows denote the compressional stresses that resulted in the formation of the wrinkle ridge. What happened to cause this reversal, and when did it happen?