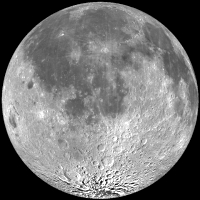 Bullialdus is a complex crater located in the western part of Mare Nubium, at 20.7°S, 337.8°E (60.7 km diameter). Like all complex craters, Bullialdus has terraced inner walls and a central peak. The Featured Image shows an oblique view, taken from the West looking east at the eastern crater wall (north is to the left). The central peak towers 1.1 km above the flat crater floor. This NAC pair was taken while LRO was ~74 km above the lunar surface. This central peak may hold clues to the composition of materials deep within the Moon's crust.

Large complex craters excavate material from great depths in the lunar crust. The central peak is formed shortly after the bolide impact. While material is excavated and ejected to form the crater cavity, the ground at the center of the impact elastically rebounds after the shock and pressure. The material in the central peak originates from the deepest point in the lunar crust compared to the ejecta and rim material. These central peaks give scientists an opportunity to study the composition of the lower crust and upper mantle in order to understand how planets form and evolve over time.

While the circular shape of the crater rim is degraded by slumping, the morphology of the crater's ejecta blanket is still visible. The persistence of the ejecta blanket morphology is an indicator that helps scientists estimate the age of the crater. Since the ejecta blanket hasn't been destroyed by subsequent impacts (micrometeorites and larger bolides), it means that Bullialdus is Eratosthenian in age (somewhere between 1.1 and 3.2 billion years old). You can compare the differences between Bullialdus and the crater Tycho, which is only 110 million years old. In the WAC context image (above) and digital terrain image (below) a smaller crater can be seen along the southeastern rim of Bullialdus. This crater (Bullialdus A) is clearly older than Bullialdus since ejecta from Bullialdus partially fills the interior of Bullialdus A. Bullialdus A is also non-circular in shape and it may have been deformed by the impact that created Bullialdus.