Clam Shell on the wall of Lalande C 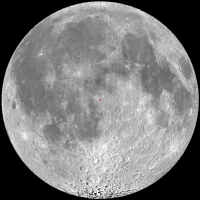 Oblique impact craters can form when the angle of impact is less than 15° from the horizontal or from impact into sloped terrain.

The oblique crater in Lalande C does have an asymmetric ejecta blanket (see the full NAC image) and a poorly defined zone of avoidance. The crater shape is not circular; instead, the irregular crater shape is reminiscent of a clam shell. There is also a blocky jumble of mostly high-reflectance material collected downslope of the crater, where the rim would be. What could explain the presence of this material?

Circular, or bowl-shaped, craters form when impact occurs greater than 15° from the horizontal (the most probable angle of impact is 45°), and material from within the crater is ejected ballistically to form an expansive, symmetric ejecta blanket. However, because the bolide impacted into the sloped crater wall, the material ejected from the crater in today's Featured Image did not form a symmetric ejecta blanket. What this means is that the jumble of high-reflectance material is probably excavated material that was ejected at low velocity from the crater during crater formation. LROC NAC images of oblique craters such as this one show similar features and certainly require additional study!

Take a look for yourself in the full LROC NAC image! Can you identify the extent of asymmetric ejecta superposed on the wall of Lalande C?